Nanuk: Polar Bear looking me right in the eye 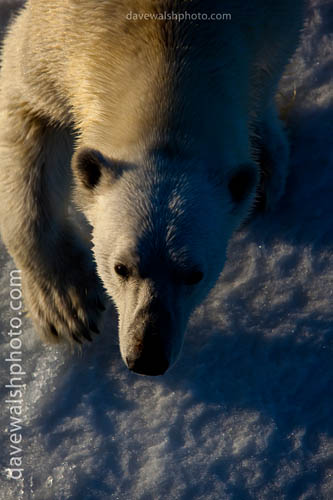 Nanuk: Polar Bear, Ursus Maritimus seen from the deck of the Arctic Sunrise in Kane Basin, North west Greenland. The bear’s curiosity drew the ship while it was stationary, in sea ice, just after midnight on Sunday morning. It came very close to the ship, and even looked like it thought about trying to scale the side of the vessel, before playfully rolling about on the ice.

Chief Bottle Washer at Blather
Writer, photographer, environmental campaigner and "known troublemaker" Dave Walsh is the founder of Blather.net, described both as "possibly the most arrogant and depraved website to be found either side of the majestic Shannon River", and "the nicest website circulating in Ireland". Half Irishman, half-bicycle. He lives in southern Irish city of Barcelona.
Tags:polar_bear
previous article
Greenland flag mural on apartment block, Nuuk, Greenland
next article
Walrus, Kane Basin, Northwest Greenland