Due to many Blatherskite excursions around Ireland, and expeditionary forays into the National Library, many odd and unexpected phenomena have raised their serpentine or furry heads.

Last summer, following an appeal for information in his Alien Zoo column which can be found in Fortean Times, Blather got in touch with cryptozoologist Karl Shuker, to swop information pertaining to the Dobhar-chú (a.k.a. the Water Hound or Master Otter), and in particular, allegations concerning the demise of a Co. Leitrim woman in 1722, supposedly mauled by such a beast. Sligo fortean Joe Harte managed to track down her grave, in Glenade, on the north side of Ben Bulben mountain, and this writer managed to get hold of a copy of the Journal of the Royal Society of Antiquaries of Ireland, vol. 78, (1948), where was found, on pages 127-129, The Dobhar-chú Tombstones of Glenade, Co. Leitrim by Patrick Tohall. Later on, last September — as mentioned in an earlier Blather Joe and I visited the grave. 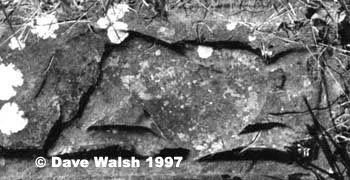 The matter of the Dobhar-chú is certainly a curious one, even in the ranks of the world’s lake monster lore, due to their relative recent history combined with the unsavoury habit of killing, or at least attempting to kill humans. In A Description of West or H-lar Connaught (1684) by Roderick O’Flaherty, we come across this story from Lough Mask:

‘There is one rarity more, which we may term the Irish crocodile, whereof one, as yet living, about ten years ago (1674) had sad experience. The man was passing the shore just by the waterside, and spyed far off the head of a beast swimming, which he took to be an otter, and took no more notice of it; but the beast it seems lifted up his head, to discern whereabouts the man was; then diving swam under the water till he struck ground: whereupon he run out of the water suddenly and took the man by the elbow whereby the man stooped down, and the beast fastened his teeth in his pate, and dragged him into the water; where the man took hold of a stone by chance in his way, and calling to mind he had a knife in his jacket, took it out and gave a thrust of it to the beast, which thereupon got away from him into the lake. The water about him was all bloody, whether from the beast’s blood, or his own, or from both he knows not. It was the pitch of an ordinary greyhound, of a black slimey skin, without hair as he imagines. Old men acquainted with the lake do tell there is such a beast in it, and that a stout fellow with a wolf dog along with him met the like there once; which after a long struggling went away in spite of the man and his dog, and was a long time after found rotten in a rocky cave of the lake when the waters decreased. The like they say is seen in other lakes in Ireland, they call it Doyarchu, i.e. water-dog, or anchu which is the same.’

Our Leitrim lady, however, seems to have had a less fortunate fate. On her headstone is a raised illustration of what appears to be, for all intents and purposes, a stylised otter impaled by spear, held in a disembodied hand. The deceased name appears to have been Grace, but her surname is indecipherable – possibly McGlone. Tohall, who had 50 years less weathering to deal with, found that:

‘Line by Line the text reads: –(1) (Illegible), (2) ??ODY OF (3) GRACE CON (4) N?Y WIFE (5) TO TER MAC (6) LOGHLIN WHO (7) DYD 7BER (8) THE 24TH (9) ANN DMI (10) MDCCXXII. Points of note are: (a) The woman is still spoken of as “Grainne ” (not “Grace”) around her home; (b) The name “Ter” is obviously a contraction for “Terence”, the modern baptismal name adopted to supplant the traditional “Toirdhealbhach.” Only recently has the spoken language surrendered to the change, as down to our own time those who signed “Terence” were called “T’ruá­lach” in this locality. I have heard it so pronounced, exactly as John O’Donovan did here about 1835, when he wrote the names as “T’raolach”;(c) Adherence to contemporary classical forms: the contraction “7ber,” for September and the use of the “Possessive Dative” case; (d) the Gaelic custom of a married woman keeping her maiden name — incongruous in the English text.’

According to Tohall, there are two different main versions of on the death of a women washing clothes in Glenade Lake. A second tombstone at the south end of the lake was also connected to the tale, but has since vanished. The two accounts seem to have defaulted to the remaining stone, with ‘strong, local tradition’ preferring to connect the more interesting of the two versions. 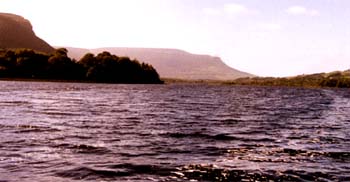 ‘A woman named Grainne, wife of a man of the McLoghlins, who lived with her husband in the townland of Creevelea at the north-west corner of Glenade Lake, took some clothes down to the lakeshore to wash them. As she did not return her husband went to look for her and found her bloody body by the lakeside with the Dobhar-chú asleep on her breast.

Returning to the house for his dagger he stole silently on the Dobhar-chú and drove the knife into its breast. Before it died, however, it whistled to call its fellow; and the old people of the place, who knew the ways of the animals, warned McLoghlin to fly for his life. He took to horse, another mounted man accompanying him. The second Dobhar-chú came swimming from the lake and pursued the pair. Realising that they could not shake it off they stopped near some old walls and drew their horses across a door ope. The Dobhar-chú rushed under the horses’ legs to attack the men, but as it emerged from beneath them one of the men stabbed and killed it.’ 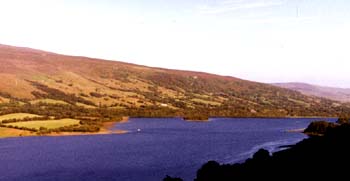 The second version describes the killing by a Dobhar-chú of another woman engaged in washing newly-woven cloth in Glenade lake when she was attacked. The boundary of the townland of Srath-cloichrán (Sracleighreen) and Gob-an-ghé (Gubinea) is the alleged location of this bloodshed (I emphasise the word ‘boundary’, as it denotes a place of liminal status — akin to the traditional importance of such places as crossroads). Yet another variant tells how the avenger Dobhar-chú had a single horn in the centre of its forehead, which it gored the horses with.

Tohall sees the Congbháil monument as being ‘the only tangible evidence’ for the idea of the ‘King Dobhar-chú,’ or Killer-Dobharcá.

‘Lexicographers of both districts record two meanings for Dobhar-chú (derived from Dobhar, water, and chú, hound): (a) the common otter (Lutra Lutra ) a term now superseded by Mada-uisge in Northern Ireland and Scotland; (b) ‘a mythical animal like an otter’ (Dineen). In Co. Leitrim the latter tradition survives strongly: ‘a kind of witch that ruled all the other water-animals’ (Patrick Travers, Derrinvoney); or used jocularly to a boy along Lough Allen,”Hurry back from your errand before dark, or mind would the Dobhar-choin of Glenade come out of the water and grab you.” The best summary of the idea is set out in the records of the Coimisiun le Báaloideas by Seán Ã³ h-Eochaidh, of Teidhlinn, Co. Donegal, in a phrase which he heard in the Gaeltacht: ‘the Dobharchú is the seventh cub of the common otter’ (mada-uisge): the Dobhar-chú was thus a super otter.’

It seems to this writer that the identification of the Dobharchú with the fairly shy otter (which can be found at lengths of over 5’6″ (1.67m) including the tail) seems to be by default — no other known Irish water creature comes as close to a rational zoological explanation. Is the Dobhar-chú some hungry lake serpent manifestation which grows legs occasionally when it feels like eating? It’s a matter that Blather is having grave difficulty providing hypothetical explanations for.

Chief Bottle Washer at Blather
Writer, photographer, environmental campaigner and "known troublemaker" Dave Walsh is the founder of Blather.net, described both as "possibly the most arrogant and depraved website to be found either side of the majestic Shannon River", and "the nicest website circulating in Ireland". Half Irishman, half-bicycle. He lives in southern Irish city of Barcelona.
previous article
Negative Capability: Mesospheric clouds and the Mark of Zorro
next article
Photographs from Lake Seljord