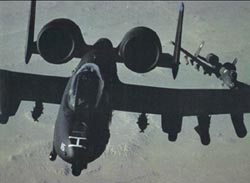 The very first issue of Blather *One of Our Bombers is Missing!*, way back on 12th May 1997, dealt with the terrific furore which had erupted over the demise of Capt. Craig Button, a U.S. Air Force pilot who had buried his A-10 bomber aircraft into the side of a Colorado mountain, with a full payload of bombs. All sorts of theories were bounced around back then, between connections to militia, the then forthcoming McVeigh trial, and claims of suicide due to sexual confusion.

Considering the amount of US Air Force accidents that have failed to escape our attention in the past year or so, with F-16s dropping out of the sky at what appears to be regular intervals, it is curious as to why this one incident has refused to lie low. Was it merely the cargo of bombs, or something more interesting?
Credible homosexuality
The Air Force Office of Special Investigations has released a report concerning the matter.
“No credible evidence to support theories of homosexuality, financial difficulties, family conflicts, militia ties or any other possible motivation has been discovered,” said Major Steve Murray, a spokesperson for the Air Force.
However, other motives, however tenuous, have apparently come to light. If, as some may claim, the military are covering up some deeper mystery, they certainty deserve credit for imaginative scapegoating. According to *The Tucson Citizen*, Button’s mother was a Jehovah’s Witness opposed to killing (does this mean that the mothers of other military folk are expressly unopposed to killing?), and a few days before his death, Button had asked his parents for “more information about the end of the world”, which luckily seems to be available in pocket-sized pamphlet form.
At least, a ‘religious pamphlet’ was found in Button’s bed-stand, which described “God asking a father to sacrifice his only son on a burning pyre at the side of a mountain”. A copy of – wait for it – *The Bible* was also found. Of course, the inference is that Button was the ‘lone-nut with crazy religious beliefs’ beloved of assassination investigations and the like.
The inclusion of the Bible as a prop appears to be a rather underhand and shoddy piece of implication, not only inferring that anyone who has a copy is subject to suspicion, but also leading Blather staff to wonder about the fate that would befall us should an investigation ever ensue of HQ’s bookcases, where far more lurid texts than the rather racy *Bible* are housed. Then again, this writer isn’t entrusted with the controls of an A-10 bomber.
“Capt. Craig Button intended to die or be rescued by divine intervention of God at the last possible moment,” stated the Air Force report.
[link dead: http://www.tucsoncitizen.com/special_projects/button11_18_98_1.html ] The Tucson Citizen. 18th November 1998
*Military still wondering why pilot crashed jet into mountain*
Nando Times
19th November 1998
Photo Source: [link dead] Warthog Territory.
All about the A-10 Thunderbolt.
+Virgin Mary Latest+
This woman rarely stays out of the mainstream media these days, as she continues her unflagging world tour extravaganza, as remarked in *Georgian Archetypes* and *Straddling Two Worlds*.
It’s Canada these days, with appearances in Riverview, New Brunswick, on the back of a pizza billboard, and Cape Breton Island, Nova Scotia, but this time on the brick siding of a Tim Horton’s doughnut shop, causing disruptions in traffic.
Such claims raise the ire of one Rev. Dan Bohan, a Catholic priest at Riverview’s Immaculate Heart of Mary Church. “People seeing the image of the Blessed Virgin on a pizza billboard, Jesus on a washroom floor and Mother Teresa on a bun is something I don’t consider very respectful”, sez he. “There is no veil or face on the sign that I can see,” he said.
“It’s just a crescent-shaped thing with a dark stain in front and a light one behind it. I think it’s quite insulting that people would think this was how the Virgin Mary would appear to them. This and other examples only show that people are becoming caught up in the millennium hysteria… but they are not going to find them on a pizza sign or a doughnut shop.”
Aha, so as a man of the cloth, Rev. Bohan *would* of course know that if Yer Wan appeared, she’d have a veil on her. Very astute.
*Virgin-sighting claims offend priest*
(Victoria (BC) Times-Colonist, 19 Nov 1998, p. A9)
*Jesus said appearing nightly at Canadian doughnut shop*
Infobeat News, 24th September 1998
Recent Virgin Mary coverage by Blather here and here.
+ Chupa Chupa Latest+
In *Straddling Two Worlds*, Blather acknowledged a query concerning some rather dubious claims of a Chupacabras (Goatsucker) encounter in a Brazilian cave. We expressed our lack of faith in the accompanying photograph – one the witnesses practically posing with what appeared to be a giant bug. The ever reliable *UFO Roundup* has followed up the matter, announcing the suspension of further investigation in the cave, near Baldim, Minas Gerais, just 110km (69 miles) north of Belo Horizonte (Southeastern Brazil). The stoppage is due to lack of suitable equipment, insurance and implications, and to quote ufological investigator Vittorio Paccacini “most of the people there didn’t feel comfortable with the idea of returning to the halls of that cave”. The spelunkers who reported the creature have also contacted Paccacini, as they were unhappy with how their story and photo had been circulating about the Internet. We at Blather HQ can only sympathise.
+More+
Original *UFO Roundup* Article and photos
(Volume 3 Number 42, November 1998)
*UFO Roundup* followup
(Volume 3 Number 45, November 1998)
Original Blather comments:
Straddling two Worlds