A matter of days after the Samhain issue pitter-pattered into the mailboxes of the Blather clientele, one Sam Smyth of the Irish Independent started an article titled Ultimate sacrifice for new boy Simon thus: ‘bright-eyed and eager, Simon Coveney was led into the Dail like a virgin being inducted into the Hell-Fire Club’. Coveney is a newly-elected member of the Irish parliament (Dail TD) for Cork South Central. Is it mere coincidence that Mr. Smyth should employ this Hell-Fire comparison, or did Blather’s far reaching influence create a snowball (in hell) meme? 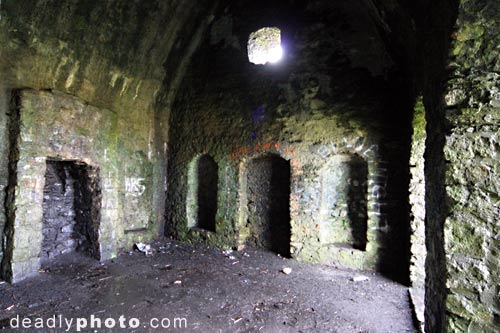 The Hon. Pat Marren was in touch about last week’s issue, with a few quotes concerning the exploits of the ‘Bucks’:

‘Your discussion of the “Hell-Fire Club” and mention of the immortal Buck Whaley jogged the synapses, so I duly betook myself to my all-too capacious library (the mammy is all for heaving it out in the yard and selling it to the literati of North Granby, Connecticut, but I say leave the man in peace) and I duly unearthed the following, from Ulick O’Connor’s “The Times I’ve Seen,” a biography of the inestimable Oliver St. John (another St. John!) Gogarty, 1963, Ivan Obolensky Inc., New York, p. 34-5:’

[Blather note: Gogarty formed the basis for the character of ‘stately Buck Mulligan’ in Joyce’s Ulysses ]

“Another element in the environment of Dublin had its influence on theformation of Gogarty’s character. This was the tradition that had survived in the popular imagination from the 18th century; the tradition of ‘Bucks,’ ‘Fireaters,’ and ‘Shams,’ who flourished side by side with the passionate oratory and patriotic spirit of the Anglo-Irish parliament in College Green. The legend lived on in the novels of Charles Lever and in the street ballads which recorded their feats and escapades. Among them was ‘Buck’ Whaley, who walked to Jerusalem for a bet of 10,000 [pounds] and played handball against the Wailing Wall amidst the protests of indignant rabbis. Another was ‘Tiger’ Roche, who, even in the days when travel was difficult, was ‘wanted’ in places as far apart as London, Canada, and Australia for dueling activities. ‘Buck’ English once shot a dilatory waiter and then had him charged on the bill. There was ‘Fighting’ Jack Fitzgerald, who used the Dublin mob to stave off arrest from the police on his frequent visits to the metropolis, where, despite the fact that he belonged to the landed gentry, he was a wanted man.

“A duel in those days could start at the drop of a hat. Though dueling was illegal, judges occasionally issued challenges to impertinent barristers, and since the Four Courts was beside the dueling grounds in the Phoenix Park, their Lordships could get back to hearing quickly if their aim was in. [Henry] Grattan lost his coat-tails in the House of Commons in a duelling escapade as he fled through a door which was slammed shut by the sergeant-at-arms whose duty it was to arrest members who proposed to settle their disputes with pistols.

“The Bucks’ Castle (the Hell-Fire Club) can still be seen on a hilltop near Dublin. Here they galloped in the evening dressed in red and black (the devil’s livery) to show not so much their sympathy with Satanism as their contempt of superstition. Their leader was Jack Parsons, the Earl of Rosse.”

I would venture to wonder if Mr. O’Connor’s last paragraph is a trifle hyperbolic; when referring to the building atop Mont Pelier Hill as a castle , I can assume that he means it in jest. This is the first I’ve heard of red and black livery… it seems ridiculous, but not impossible, considering Richard Whaley’s whim of Sunday chapel-burning. But as for Jack Parsons? Last week, we found that Andrew Behan thought that Richard Parsons (1st Earl of Rosse and founder of the Irish Hell-Fire Club) and Colonel Jack St. Ledger were in the same person, and Blather sought to drag their personas apart. Rather than taking their names as a.k.a., O’Connor seems to have composed them into Jack Parsons .

Oddly enough, a much later Jack Parsons popped up during the 1940s as as the head of the Californian Ordo Templi Orientis (O.T.O.), implicating himself with along with L. Ron Hubbard (founder of Scientology) and good old Aleister Crowley. This is where it starts getting all weird again – according to Paul Rydeen, who refers to Michael Hoffman, Parsons claimed to be a descendant of a Hell-Fire Club founder!

Parsons was a ‘respected chemical engineer and aerospace pioneer’ and ‘was instrumental in the founding of both the California Institute of Technology’s Jet Propulsion Laboratory and of Aerojet General’. He even has a crater on the the moon named after him.

In 1946, Parsons and Hubbard endeavoured to carry out what is known as the Babylon Working , to incarnate a physical aspect of Babylon, the Scarlet Woman of the Book of Revelations (17:3-6). They believed that Babylon was the herald of the new Age of Horus, and that Revelations was the understandably negative interpretation by those of the dying Age of Osiris:

“So [the angel] carried me away in the spirit into the wilderness; and I saw a woman sit upon a scarlet coloured beast, full of names of blasphemy, having seven heads and ten horns. And the woman was arrayed in purple and scarlet colour, and decked with gold and precious stones and pearls, having a golden cup in her hand full of abominations and filthiness of her fornication: and upon her forehead was a name written, ‘MYSTERY, BABYLON THE GREAT, THE MOTHER OF HARLOTS AND ABOMINATIONS OF THE EARTH.’ I saw the woman was drunken with the blood of the saints, and with the blood of the martyrs of Jesus. And when I saw her, I wondered with great admiration.”
(King James Bible)

Although Crowley had written the somewhat hilarious Moonchild – concerning a similar experiment – previous to the Babylon Working , he wrote in a letter to Karl Germer (O.T.O. successor Crowley, and curiously, a resident of Dublin… California):

‘Apparently Parsons and Hubbard or somebody is producing a moonchild. I get fairly frantic when I contemplate the idiocy of these louts.’

Parsons died on June 17th 1952, aged of 37, while moving boxes of chemicals around his house in Pasadena, California. There’s plenty more to this story, most of which beyond the scope of this Blather, so read on from the links below…

Blather will research further to establish whether or not there really is any connection between Parsons of the O.T.O and the Hell-Fire Club Parsons – i.e. The 1st Earl of Rosse. Certainly invention ran in the Earl’s family, with William Parsons, the 3rd Earl of Rosse (1800-1867) constructing the famous telescope at Birr Castle, Co. Offaly in 1839 (largest telescope in the world for 70 years), and his son, Charles Parsons inventing the steam turbine.

Recommended: Geoffrey Ashe – The Hell-Fire Clubs: A History of Anti-Morality

Nieson Himmel, in the The Bare-Faced Messiah Interviews

Jack Parsons & The Curious Origins of the American Space Program

THE ANOMALIST
The Anomalist web site has a new home at http://www.anomalist.com. You’ll find just about everything from the old site there, though we’ve spruced up the pages a bit in the process. At the same time we have introduced one new item that should be of interest to everyone–the Anomalist Newsline, which provides links to a whole other world of breaking news stories on aliens, UFOs, Bigfoot, lake monsters, puzzling archeological discoveries, odd medical findings, and a whole lot more. Send in what you find while trawling the net and we’ll do our best to update it on a daily basis.

Chief Bottle Washer at Blather
Writer, photographer, environmental campaigner and "known troublemaker" Dave Walsh is the founder of Blather.net, described both as "possibly the most arrogant and depraved website to be found either side of the majestic Shannon River", and "the nicest website circulating in Ireland". Half Irishman, half-bicycle. He lives in southern Irish city of Barcelona.
previous article
The Irish Hellfire Club: No Smoke Without Fire
next article
Energy fields! Shields up!