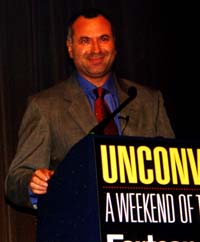 Having savoured the delights of Saturday night London, and after crept into my bed with the sun well above the horizon, this Blatherskite was in rag-order by the time he stumbled into the Commonwealth Institute on Kensington’s High St., a little too late to barge-in and search for the thread of Jan Bondeson’s 11 o’clock ‘Basilisks, Vegetable Lambs, Stuffed Mermaids and Other Monsters and Marvels from Old Natural History’, or Daniel Wojcik’s ‘From Spirit Photos to Apocalyptic Polaroids’. (Image of Sergio Della Sala)

*Tardy*
If we hadn’t been so tardy, we would have lurched into the latter, familiar as we are already with vegetable lambs, and Bondeson’s *A Cabinet of Medical Curiosities* (I.B. Tauris, 1997, ISBN 1-86064-228-4), and intrigued by what Wojcik had to say…
A Cabinet of Medical Curiosities (Amazon.com)
A Cabinet of Medical Curiosities (Amazon.co.uk)
*Wry Grins*
Instead we managed to make it to see Ted Harrison’s ‘Pre Millennial Tension’ at 1200. Harrison – writer, TV producer and journalist – gave forth on the symptoms of tension appearing in the months before the (alleged) change of millennium. We say alleged, as Harrison, Robert Anton Wilson, Arthur C. Clarke, Conor Cruise O’Brien, and others (including this Blatherskite), seem to be sporting wry grins at the current ‘glitz and glamour’ attitude leading up to January 1st 2000, guessing that if it weren’t for the romanticism of fine round numbers (ahem, ‘2000’), there’s bugger all else to celebrate, contentious as our current calendrics seem to be (and that isn’t to say that this writer *won’t* be celebrating… like we need an excuse).
As in Daniel Wojcik’s talk in part I of ‘UnConventional Means’, Harrison enjoys pointing out the daftness of it all, the coming about of the belief in Messianic return, the disillusionment of prominent Y2K consultants, their subsequent fleeing to rural bunkers, and the fact that apparently 25 per cent of the United States population believe that ‘Jesus will return in their lifetime’.
This millennial tension – as opposed to millennium – is nothing new, we know – the Old Testament documents as much. The current spate of it, is, relatively speaking, nothing new either – Rev. Billy Graham was stirring it up back in ’73. This methodology appears to be rooted in getting one’s people on the edge of expectation, of imminent change.
Harrison has recently been to Jerusalem, and entertained us (at least those of us with finely tuned cruel black humour) with tales of ‘Jerusalem Syndrome’, a psychological state suffered by many visitors to the city, consisting of several steps:
* Anxiousness of the Christian tourist to Jerusalem
* Breaking away from main tour group
* Purification – washing, ridding of worldly possessions…
* The wearing of white robes
* Singing
* Preaching
Most sufferers recover after a week – for others it’s not so simple…
*Anti-Climax Syndrome*
Harrison reckons that, in a few years, we may see a new condition appearing: ‘Anti-Climax Syndrome’ – a 21st Century version of the Millerite ‘Great Disappointment’ of the 1840s – and again impacted by constant ‘re-calculation’ of the allegedly impending apocalypse. He notes with dry amusement some of the millennialists who, in recent times, flew to Jerusalem for the End of the World – but bought return tickets. He also proposes a dip in Christian end-time tension after 2000, hitting a low in the second decade of the new millennium, and rising again in time for 2033 – to ‘celebrate’ the crucifixion.
As for the Y2K bug problem – Harrison reckons that, in some ways, millennial studies can tell us far more about the bug than knowledge of computers. He is sceptical about massive disaster scenarios, but he says that if his toaster isn’t working on 01/01/2000, he’ll eat his words…
*Mind Myths*
After lunch, and the Charles Fort Institute AGM, we were off to see neuropsychologist Professor Sergio Della Sala of Aberdeen University discussing ‘Mind Myths: Exploring Popular Assumptions about the Mind and Brain’. Della Sala has to be one of the most entertaining speakers we have ever encountered – his university lectures must be a howl, interspersed with comedy and trickery… at one point he walked to the front of the stage asking the audience members to raise their right hands… and say ‘banana’. Like good students, we did so… He clicked onto the next slide… which said something like ‘At approximately 2:15pm on Sunday 25th April 1999, several hundred people in an auditorium in Kensington will say ‘banana’ for no apparent reason…’
Della Sala isn’t shy about criticising the pervasive myths abounding about the mind – he carefully points out the differences between what we actually ‘know’ about the brain, and what popular opinion and media assumes we ‘know’.
He went on to show some of the cognitive disorders that he has been studying – using such test as ‘the burning house’ – conditions, where for instance, a patient can only ‘see’ half of their ‘visible’ universe – if shown, e.g. a cow, and told to draw it – *they will only draw half the cow*…
Professor Sergio Della Sala
*Picknett and Prince* 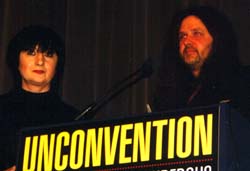 With the tiniest of breaks, it was once more into the breach, and on to Lyn Picknett and Clive Prince’s – ‘Masters of the Millennium’ – a a sharp criticism of the ‘new egyptologists’ Hancock, Temple, Bauval and West. Picknett and Prince, authors of *The Turin Shroud: In Whose Image?* and *The Templar Revelation: Secret Guardian of the True Identity of Christ*, sought to reveal the occult, ultra-right-wing roots of the alternative Egyptology of Hancock, Temple, West and Bauval, by tracing it back to French mathematician Schwaller de Lubicz, who, as Picknett and Prince allege, was a known fascist and racist, since venerated for his pyramid theories by the new egyptologists.
We won’t even *attempt* to try and recreate the picture drawn in the lecture, but suffice to say it referenced Aleister Crowley’s Cairo Working – i.e. *The Book of the Law*, Madame Blavatsky and Theosophy’s influence on Nazism, Edgar Cayce’s Atlantis beliefs, millennialist belief in hidden Egyptian secrets which, when discovered, will prompt apocalyptic change, corralling of circumstantial evidence to fit a given hypothesis… All of this apparently leads the current popular ‘understanding’ of what ‘Egypt is all about’, thanks to the proliferation and easy accessibility of the bestsellers on Alternative Egyptology.
Egyptology is something that we at Blather tend to steer clear of, as it’s a vast and controversial minefield that we have neither the time or conviction to devote our time too. However this talk, even if relying heavily on circumstantial evidence was a delight – Picknett and Prince weave a damn fine story… stay tuned for their new book on the subject…
*Ian Simmons* 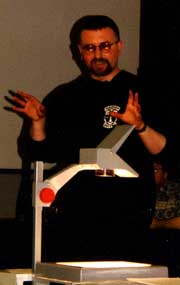 A dash upstairs saw those improbable peers, the celebrated Duke of Mendoza and the honoured Count O’Blather, loitering at the back of the hall for Ian Simmons’ ‘Proof of Everything’. Ian, a biologist and contributing editor to *Fortean Times*, sought to illustrate a model for the most advantageous use of the fragile concept of ‘proof’. He broke it down into three main areas:
* Personal Proof
* Legal Proof
* Scientific Proof
This talk was arguably the most practically applicable of the weekend, yet some audience members fell prey to Sunday afternoon jitters and seemed displeased with the ‘academic’ content. Shame on them – Simmons’ knowledge, wit and charm are not to be dismissed lightly. In fact, Ian has furnished us with a copy of his talk, so that we may quote from it – saves us from mucking up what we thought he said… Ian Simmons explains ‘proof’
Personal proof, says he, is often confused with the other two – “I believe this is true – you have to trust me that it is” – akin to religious belief – or as Simmons puts it, ‘Many UFO reports, cryptozoological sightings, alien abductions and psychic events are in the realm of personal proof, we have to rely on the stories of the experiencers who believe it, but can produce no corroboration from other people or physical traces of the event’…’in essence, the evidence is the proof’.
Legal Proof – ‘This collects the evidence, and tries to prove something “beyond reasonable doubt” while it is more objective than personal proof, it is still to some degree subjective. It is designed to gather all the material evidence and personal testimonies of people involved in an occurrence and to work out from them a consensus of what took place under a particular set of non-repeatable conditions. This does not mean something is absolutely objectively true, just that the consensus of informed opinion viewing the evidence thinks it is so.’
Scientific proof is different in that ‘it is an objective method which makes an attempt to pin something down in a way which is testable and repeatable to anyone, with all the parameters influencing a phenomenon understood so that it can be reproduced at will. It works by proposing hypotheses which can be tested. These must account for all observed phenomena, must have predictable outcomes, must be able to generate further testable predictions and must be disprovable.’
Questions? Flames?
*Brookesmith* 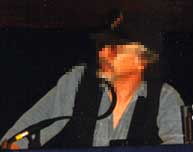 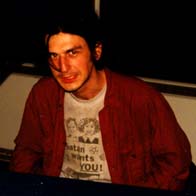 FT’s Mark Pilkington – possibly more evil than Blather’s daev
+More+
Fortean Times
The Charles Fort Institute
Wild paraphrasing from *Fear and Loathing in Las Vegas* Hunter S. Thompson
Unconventional Means 1
+Ireland UFO-Watch+
Rumour has it that yet other prediction of Irish UFO activity was made for tonight, May 11th by our favourite UFO group. There’s no *expected* astronomical phenomena of any significance tonight, but doubtless those that look will see what they expect to…
Dave (daev) Walsh
May 11th 1999