Last night, for the first time in years, I enjoyed the mad genius of Terry Gilliam’s amazing movie…

Brazil,
Where hearts were entertaining June
We stood beneath an amber moon
And softly whispered, ‘Someday soon’
We kissed and clung together then
Tomorrow was another day,
The moonlight found us miles away
With still a million things to say,
I will return to old Brazil.
Last night, for the first time in years, I enjoyed the mad genius of Terry Gilliam’s Brazil. 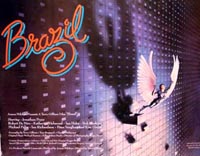 It’s a masterful, visually stunning, and conceptually challenging piece of work, laden with black humour. With a big tip of a trilby to Orwell’s 1984, Gilliam tells the tale of Sam Lowry (Jonathan Pryce), a bureaucrat in an grey, art deco steampunk world, where the computer age has taken off, but microchips have yet to be invented.
Lowry works in a dull job in the Information Records department of the Ministry of Information, but keeps lapsing into a romantic dream of flying through the skies, in shining armour and white wings, towards a beautiful ethereal blonde.
The plot is far too convoluted to summarise here, but after a fly gets caught up in a computer, causing the wrong suspect to be hauled in for ‘Information Retrieval’, causing chaos in the ordered world of forms and rubber stamps, Sam eventually finds her working as a greasy truck driver, and living in a council flat. But is she a terrorist?
The movie is set to a rich soundtrack by Michael Kamen, based around the classic samba tune Brazil by Ary Baroso. Once it gets into your head… it stays.
Look out for Robert DeNiro as Harry Tuttle, the freelance vigilante plumber, and his arch enemies Spoor (Bob Hoskins) and Dowser. Also stars Ian Holm as the neurotic Kurtzmann, and Michael Palin as the nasty Jack Lint.
Brazil on imdb.com
Terry Gilliam on imdb.com
Buy Brazil on SendIt.com
Buy Brazil on Amazon.com
Buy Brazil on Amazon.co.uk
get the soundtrack by Michael Kamen
Brazil on google.com
Interview with Gilliam about Brazil
Brazil: A black movie, but high in color

Chief Bottle Washer at Blather
Writer, photographer, environmental campaigner and "known troublemaker" Dave Walsh is the founder of Blather.net, described both as "possibly the most arrogant and depraved website to be found either side of the majestic Shannon River", and "the nicest website circulating in Ireland". Half Irishman, half-bicycle. He lives in southern Irish city of Barcelona.
previous article
The Real Dublin
next article
Blowing money on O’Connell St.