In a new series exploring the sexual peccadilloes of Irish political parties, we replicate the US model involving crack teams of interns, rigorously trained to penetrate the highest echelons of government. This is not mere titillation. Through Miss Kinky’s expert manipulations , we hope to gain fresh insight into the cultural preferences of our honourable elected representatives, and into the most intimate workings of the party machinery behind them.
It was decided to initiate the project with Sinn Féin since, flush from their success in last year’s general erection, their representatives proved to be eager, dynamic and gifted with a ‘hands on’ approach to community interaction. Next in the series we look at Fianna Fáil, fisting and felching – don’t miss it! All experimentation was carried out by fully consenting adults, none of whom are married or members of a religious order.

See No Evil, Speak no Evil
Partial sensory deprivation was achieved by placing a snug fitting black wool balaclava over the subject’s head, followed by a blindfold (the blindfold was removed for the visual stimuli tests). The subject was handcuffed, gagged with an orange sash, and firmly tied to a stout wooden chair.
These restraints were administered by our fearless Miss Kinky, attired in a black beret, neatly fitting red gloves, and a figure hugging Celtic shirt, fetchingly coordinated with a tricolour loincloth draped modestly around her hips.
Response to stimuli was assessed using the following methodology: subject was requested to nod once to indicate pleasure, twice for displeasure, and three times to stop the experiment. Response was simultaneously judged on the subject’s involuntary physical reaction, monitored by the hawk-like watch of Miss Kinky. 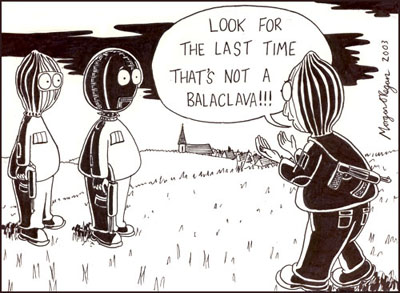 Hit me Baby One more Time
With the subject thus immobilized, a light drubbing using a short whip commenced. The subject nodded once, with some vigour, and flagellation continued. However, when the cunning Miss Kinky then upended the whip and placed it against the kneecap of the subject, detumescence followed at lightning speed.
Silver pasties decorated with lilies were then adhered to the subject’s nipples. After some rubbing and tugging, the ‘stickies’ were then swiftly ripped from subject’s bosom. Observed response was slight; subject did not flinch, despite the fact that some of the surrounding chest hairs were removed with the ‘stickies’.
As a final test of the subject’s pain threshold, gentle pressure was applied to the neck, gradually increasing until partial asphyxiation occurred. Subject was visibly excited by this procedure, until he was informed that the strangling device in use, was, in fact, a string of rosary beads, upon which he nodded twice, the signal for displeasure, and the experiment ended on a low note.
Aural sex
In order to lighten the mood, the round of aural stimuli then commenced, accompanied by a steady helping hand from Miss Kinky. First up was Amhrán na bhFiann and as anticipated, subject immediately stood to attention, proud and fully erect. This was followed by The Fields of Athenry, during which keen eyed Miss Kinky noted an upward jerking movement at the end of each phrase, as though the subject were attempting to articulate an ejaculation of sorts.
Music having proved in this instance to be the food of love, the aural test shifted to the beat of a different drum — The Sash that my Father Wore and No Surrender. Subject nodded twice, displaying no small degree of agitation. Unfortunately for the future of special intelligence, his movements caused the blindfold to loosen, and he became aware that a red-gloved fist was authoritatively clenched around his engorged member. What can best be described as an insurrection followed. Subject nodded three times and on this signal, as agreed beforehand, the experiment ended. The subject was released from his bondage, apparently in good shape, though somewhat bemused. He graciously shook hands with Miss Kinky, thanked her for her attentions, and admitted that the experience, in parts, had been “hotter than July”.
Miss Kinky would like to remind you that there are many shades of green; what works for one member of parliament may not excite another, and also that green is the colour of Islam. Saints and Shinners originally appeared in the fourth issue of The Yoke

Chief Bottle Washer at Blather
Writer, photographer, environmental campaigner and "known troublemaker" Dave Walsh is the founder of Blather.net, described both as "possibly the most arrogant and depraved website to be found either side of the majestic Shannon River", and "the nicest website circulating in Ireland". Half Irishman, half-bicycle. He lives in southern Irish city of Barcelona.
previous article
Loyalty Cards, Big Brother and the Scared New World
next article
July 23rd Declared ‘Robert Anton Wilson Day’