Jasper meets a chinaman. In space. 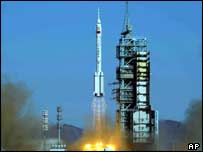 Further to our previous reports regarding Jasper’s interstellar amblings, we (and indeed Japser) recieved a bit of a surprise this morning when Japser reported that he had had a close encounter with a Chinaman.
At first we were, quite naturally, perplexed. We had assumed that Jasper was stranded somewhere near the Jovian moons and sometime around the Stone Age. On the contrary it would now seem that the intrepid feline has managed to time-shift back to the present day. We know this because the Chinese government have been crowing all day about their first succesful placement of a man in orbit around the planet earth. Either that or the ship has fallen foul of the same time-holes that caught Jasper. In which case they are fucked.
Anyhoo: The chinese president said that the launch was “the glory of our great motherland and a mark for the initial victory of the country’s first manned space flight”. Or something to that effect. You can read more about the chinese mission to the stars here.
Jasper, apparently is ‘unamused’ and profoundly dissapointed that his new space-friend failed to bring him some spring rolls and chicken soup.

Damien DeBarra was born in the late 20th century and grew up in Dublin, Ireland. He now lives in London, England where he shares a house with four laptops, three bikes and a large collection of chairs.
previous article
Fringe Experiences: Camille O’Sullivan
next article
Dracula in Galway