The Centre for Fortean Zoology: Jon Downes Interview – Cryptozoology, The Owlman and Other Monsters…

You’ve got to love the Centre for Fortean Zoology, really you do.
I had let my subscription to their journal Animals & Men lapse for a while… shame on me.
I signed up again a few weeks back, and have the current issue sitting in front of me. For an organisation that seems to exist on a budget of fresh air, they never fail to impress. And the staff, while they could be considered eccentric, are all erudite scholars. Fronted by the singular editorial personality of Jonathan Downes, Animals & Men covers not only cryptozoology – the science of hidden, or as of yet scientifically undescribed species, but also out of place animals, and animal-related anomalies.
The current issue has news snippets on weird invertebrates, the Chinese Wild Man of Shennongjia, ‘Lucky, the Walsall Snapping Turtle’, alleged Nessie fossils, big cat reports from around the UK, an in-depth article on the extinct sabre-tooth cars of Europe, and the CFZ expedition to Sumatra to look for the Orang Pendek – the alleged upright-walking ape.
So, we decided it was time to wave down Mr. Downes for a chat…

From the Centre for Fortean Zoology FAQ:
The difference between fortean zoology and cryptozoology?

There are three main types of mystery animal. The first are simple. They are ‘cryptids’ – species of animal whose existence is unrecognised by mainstream science.
The second grouping are quasi or pseudo-cryptids. The animals in this group are a little more problematical as they are members of a species which is KNOWN to exist in a place where it is not SUPPOSED to be. This can either be because it is presumed to be extinct in that specific area or, more commonly, because they are exotic species that have escaped or been introduced
The third, final, and in some ways the most contentious of the three groupings of apparently unknown creatures are the ones that may well not be creatures at all!
At the risk of severely angering the folk in the Bigfoot camp and indeed some of my friends and colleagues who have spent so much of their lives sitting on the shores of Loch Ness waiting for something to happen, this is the category into which most of the most well-known members of the iconography of Cryptozoology fit in.
This is not the time nor the place to enter into a long discussion about the veracity or otherwise of the most ‘media-friendly’ cryptids, the Yeti, Bigfoot and the Loch Ness monster but even the most hardcore nessiephile or traditional cryptozoologist would admit that the volumes that have been written about these phenomena includes a fair amount of evidence that suggests that some if not all of their manifestations may not necessarily be of physical origin.
However cryptozoology per. se. is only concerned with the first type of these animals and the CFZ is concerned with all three and more besides. In 1992, when we first formed therefore we decided that we needed to start a new discipline to encompass all the areas in which we were interested.

– From the Centre for Fortean Zoology FAQ 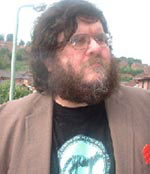 Q. What’s on the agenda for next year? I hear talk of Mongolia?
Sadly, its looking as if the Mongolia trip will have to be postponed because of lack of funding. Because Mongolia is a communist country only a certain privileged few people are able to set themselves up as licensed guides. Because they have a monopoly they charge Westerners through the nose to take them anywhere. We are currently talking to several TV companies who have expressed an interest in financing a Mongolia trip and so we hope that we shall still be able to do it. But even without Mongolia, we have agreed to join our friend and colleague Chester Moore in his research into the survival of the ivory billed woodpecker, the swamps Bigfoot, and reports of giant snapping turtles – all in Texas. I have recently returned from an exploratory trip to southern Texas and Louisiana in order to set the ball rolling. We also hope to return to Puerto Rico, and to visit a monastery in Greece where they claim to have the skeleton of a sea-monster. We also plan to take a party of CFZ volunteers to Loch Ness, and no doubt we shall be doing other stuff as and when it arises
Q. The Owlman. What the hell was going on there? And isn’t the Max Ernst connection a bit freaky?
The Owlman was seriously weird. My research into the series of sightings which began at Easter 1976 took up something like six years of my life. It cost me my marriage and – for a while at least – my sanity. However I found the story of a grotesque feathered Bird-Man haunting the woods of southern Cornwall to be utterly irresistible. It was during my researches there I met and became friends with the legendary Tony `DOC` Shiels. The links between Max Ernst and his owliness were just one of many theories which DOC came up with in a vain attempt to explain the inexplicable. When I wrote my book on the subject – the Owlman and Others – in 1996, with the benefit of hindsight I can see that I was writing as much in Tony’s voice as I was my own.
But freaky? Yes, the whole damn thing was freaky, and Doc’s suggestion that the phenomenon had somehow been triggered by Surrealchemical invocations by a bunch Surrealist artists in the 1930s makes as much sense as most of the other stuff which has been written about the phenomenon. It is also a damn sight more fun
Q. How can people get involved in the Centre for Fortean Zoology?
Simple. Check out the website, write to me, and send in yer membership fee. We are proud that we’re not one of these organisations where the many have to pay for the foreign trips of the few. Any member of the CFZ can join us either at home or abroad on one of our investigations.. Any member of the CFZ can become involved to a greater or lesser degree. We have an ever growing network of regional representatives across the world. These people work very hard for no pay gathering information, investigating cases and doing the groundwork for future investigations and expeditions. The CFZ is truly a grassroots organisation and without the grassroots we wouldn’t exist. If you’re interested in this stuff please do not hesitate to get in touch. The more the merrier.
Centre for Fortean Zoology »
More about Jon Downes »

Chief Bottle Washer at Blather
Writer, photographer, environmental campaigner and "known troublemaker" Dave Walsh is the founder of Blather.net, described both as "possibly the most arrogant and depraved website to be found either side of the majestic Shannon River", and "the nicest website circulating in Ireland". Half Irishman, half-bicycle. He lives in southern Irish city of Barcelona.
previous article
A Tale of Two Presidents
next article
Lucy Dell