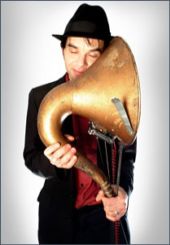 An Interview with musician Thomas Truax, the most famous son of the totally non-fictional Wowtown.

[Photo of Thomas asleep with Hornicator by Chris Saunders.]

One man band Thomas Truax is based in New York City, but he’s always touring around, and I’ve seen him live about five times in London, performing with “mechanical sound sculptures” rather than mere human musicians. His album of “dark romantic lullabies” and “lively rock melodramas”, Full Moon Over Wowtown, was one of the best albums of 2004, and I also recommend you net junkies track down a copy of his very spooky song “Inside the Internet”, on the EP Homesleep 9. The new album “Audio Addiction” will be out in June on Psycho Teddy Records.

Many of his songs describe events in a place called Wowtown, and Thomas writes and broadcasts something called the Wowtown News. Ever curious, Blather (Barry, in this case) decided to find out more about this intriguing place.

Blather: Judging from the best available data, Wowtown is a small town situated in the U.S.A. Correct? How do I get to Wowtown?

Thomas Truax : Slightly Northwest of Springfield where the Simpsons live, Wowtown used to be accessible from the south by foot or bicycle over the old Ricketty Bridge over Cricket Chirp Pass. Or you could row your canoe or drive your swamp boat through the Okey Dokey Swampland into Wowtown Lagoon (or try your luck with a more daring entry via the Paris Hilton Ravine). Popular entry from the west was by lily pad across Wowbegon Lake. Or from the north you could drive in on the treacherous Road O’ Burnin’ Rubber. Some visitors would even parachute in from aircraft launched at nearby Strip Club Airport. Everyone who wasn’t born here got here somehow, though some residents claim an ancestry of having actually climbed up directly from the primordial ooze underneath the lake!

But that was before this past November, when on a somewhat startling day the entirety of Wowtown lifted itself from the ground like a gigantic cupcake and floated away in an act of secession from the U.S. It now exists as an island floating in the Atlantic, and therefore finding it on any given day can be a little tricky.

B: From your song “Escape From The Orphanage”, and various public statements you’ve made, I gather that you grew up in Wowtown, in the orphanage?

B: Do the locals know that you now spend your time travelling the world singing about their town?

TT: Sure! Everyone’s supportive, except a certain group of old sticklers who, in response to an antifolk festival we once ran in town, have formed a club called the Pro folks. As you may know antifolk is the name for a music scene that sprang out of New York that I have some roots in. It’s not against folk music and in fact some artists in that scene are quite folky in a way but the Pro folks didn’t even seem to realize it’s a musical term and ignorantly assumed it was a political uprising against actual folks! They’re very conservative and seem to have a hard time dealing with the freedom, fun, and promiscuity that is rampant in Wowtown and they get their panties all in a bunch when they hear I sing about things like Pastor White’s drinking binges and such. They’re harmless really.

TT: When you enter the Tailspin Tavern you’ll find it somewhat dark so be careful walking as some of the regulars are very small and some others just find it more relaxing to recline upon the floor when they feel the inclination.

When your eyes adjust you’ll notice a fireplace that somewhat resembles a giant Hornicator in the middle of the room. Directly beyond that is a smallish half-circle stage with red velvet curtain at the opposite end of the room. On the right wall is a bar, to the left are some booths and bookshelves and a great big old antique jukebox. You don’t have to put money into it but you do have to keep winding it up like an old gramophone.

It plays a nice selection of old cylinders: ‘Baby Elephant Walk’, ‘Brazil’, ‘The Fish’, etc. It all feels warm and comfortable.

Take a seat at the bar. You might want to sit next to Veronica Lake, she’s always there and probably no one will be sitting next to her because everyone’s intimidated. Hank Williams, the bartender, will say ‘Howdy’ and ask you ‘What’s your poison?’ I’d recommend a local brew like Swagger Lager or Wowbegon Dark or if beer’s not your thing Hank makes a nice Send Me Straight To Mass or a killer Bloody Mary’s Uncle. All first drinks are two dollars, and each subsequent drink is half the price of the drink you had before. So your second drink will be a dollar and your third fifty cents and so on. You’ll have to buy one for Veronica when you get to the fifth because you can’t split a penny. If you get confused after this point you might want to slow down a bit and take another look around the room.

You’ll notice that things may look a little clearer by then. The ceiling is very high and full of rafters and cobwebs. Don’t take this as an indication that the place isn’t clean. The famous Huxley spider family lives up there, and it’s believed they kind of keep a watch over the bar. You’ll notice after a while that the entire place takes on a rounded quality, almost like the inside of an egg. There are lots of open doorways around the room leading to adjoining rooms. Explore them. I like the Tiki room with its fast talking tiki heads and foaming mashed potato volcano. The Make Out room is very cozy, and there’s a fantastic in-house brewery which you can wander through to the right of the bar.

Toilets anyone? The men’s room has urinals in progressive scale from those made for very tall men all the way down to groundhog size. I can’t describe the ladies room but I’m sure it’s very special.

Twin Peaks Pilot Episode – while Joan Chen announces the sawmill will be shut down for the day because of Laura Palmer’s death, Piper Laurie asks a worker, ‘What’s your name?’

TT: Ah that’s a funny one, I’d forgotten that and I can’t say I know for sure why she fired ol’ Fred but if it did have something to do with his name I think I have the answer. A friend once made me aware of a book called the ‘Truax’ based on, and in response to ‘The Lorax’, the classic environmental book by Dr. Seuss in which a little creature takes objection to the logging industry and how it’s going to wind up destroying the balance. In the Truax book, however, Truax (unfortunately) is a logger, and argues the foundations of his twisted belief, basically how logging is good for the environment. It’s not very convincing, the book was funded by the Hardwood Forest Foundation and the National Oak Flooring Manufacturers Association and if it were more popular I’d feel inspired to change my name to Thomas Lorax. Here’s a link that reviews that book .

In a very narrowly related story:

When I was working on Robot Chicken, an animated show for Cartoon Network, for a while earlier this year I took a break and lay down in the conference room at the animation studio for a while. There was this weird wooden locker/cabinet at the foot of the couch. It had a lifesize very creepy clown painted to look as if sort of coming out of the cabinet, and seemed somewhat out of place in this otherwise corporate sort of conference room. I was laying there admiring it when in comes one of the directors. He said: “You like that locker don’t you Thomas”. I said I did, kind of. Turns out David Lynch painted it, it used to be his personal locker. One of the Robot Chicken producers used to be his assistant, apparently, and inherited the spooky clown cabinet.

Music and Wowtown News are served for your delectation over at thomastruax.com

Contact him here.
previous article
Fear and Loathing in Lapland
next article
The Tara Hill bypass – what they don’t want you to know…