Recently, a joint Blather-Strange Attractor-3rd Stone group went on a trek around the ancient megalithic landscape of Avebury, in Wiltshire. And Dave, as usual, took a silly amount of photographs.

The Avebury reminds me a lot of the Newgrange area in Co. Meath, Ireland. The two places are, in themselves, not that spectacular – but the sheer scale of megalith construction has changed the rolling, fertile farmland into a ritual landscape.
About two hours drive out of the horrendous labyrinth of London, the tiny village of Avebury is a National Trust site, besieged by a constant stream of visitors. Even the local pub, the Red Lion, has a queuing system in order to deliver surprisingly edible food to the hordes of hungry passersby from Swindon and farther afield.
Over Guinness and pies, we discuss our hatred of the term ‘thus fortified’ as a potential introduction of our hike around Avebury. Instead, we eat, and leave, shoot no one, and meet up with Neil Mortimer, who’s an expert on the area ».
Avebury is a very strange place. This quaint village is, believe it or not, inside a giant stone circle, the largest in the world. In fact, as well as the village, there are other stone circles inside the ‘Outer Circle’. The scale of it all is mind-boggling – everywhere one’s looks, there’s a massive stone. Entering into one of the surrounding fields – open to the public, there’s a trail following the line of the outer circle. One of these is known as ‘The Barber’s Stone‘ – the skeleton of a supposed medieval surgeon-barber was found underneath the rock during an excavation in the 1930s. The entire complex is 421m in diameter, covering an incredible 115,000 square metres (28.5 acres), while the Outer Circle is 335m in diameter. The deep ditch outside the Outer Circle – 21m wide and 11m deep, has been dated to between 3400 and 2625 BC.
I could bombard you with more facts and figures – but I won’t. We have a quick look around the other stones, and Mark photographs me sitting in ‘The Devil’s Chair’ – the wrong method for Satanic practice, I assume, as apparently the best way to summon the devil is to run round the massive stone 100 times anti-clockwise. I know I’d be at least dizzy if I attempt it, and maybe I’m already damned enough.
We wander away from the day-tripping families, and out of the village towards the West Kennet Avenue – two rows of standing stones, 25m apart, and 2.5km long. We follow this for a bit, then take off at an angle, up over the hill, passing a badger sett on the way. From the ridge we were looking down at Silbury Hill – a massive neolithic mound nestled in a strange place – between a hill and a plain. The mound is 40m high, and covers a couple of hectares, – “archaeologists calculate that Silbury Hill was built about 4600 years ago and that it took 18 million man-hours to dump and shape 248,000 cubic metres of earth on top of a natural hill”. Crazy people, crazy times.
We descend the hill, and follow the river Kennet to the roadway. I’m watching a kestrel hovering above the corn stubble. In the distance we can see the remains of a crop circle – the corn has been long cut and the pattern has emerged in the form of grass.
On reaching the road – the A4 – climb down beside the Kennet bridge, and rummage our way through the weeds. The river, even at the October, is barely a trickle runs through a field. We emerge at the other side of the field, near some woodland. This is the source of the river Kennet – an ancient symbol of the source of life, and a possible origin for the word ‘cunt’. more on Kennet/cunt ».
Hidden away in the corner is a funny little shrine – feathers and twig pentagrams hang from trees, and other trinkets are left on makeshift altars. It’s like St Brigit’s Well without the Catholic veneer or spookiness. In the field above, pheasants are sprinting maniacally around the freshly clay.
The sun is dipping low in the sky as we stride towards West Kennet Long Barrow – another Neolithic site. This one is a chambered barrow grave, sitting astride a prominent ridge, and fronted by a kind of barrier of standing sarsen stones. When we arrive, the place is full of middle-aged women, burning incense and chanting in some kind of occult manner. Wiccans? Who knows? When the pile out to burn some candles on top of the mound, we head inside. It’s pretty big in there – none of the scrambling or crawling I’m used to from some Irish mounds. There’s a lack of artwork in here, compared with the likes of Four Knocks, Loughcrew, Knowth or Newgrange. There are subtleties in the construction though, for instance: ” the side chambers occur inside an exact isosceles triangle, whose height is twice the length of its base”.
Later, en route back to Londinium, we go looking, in the failing light, for a dolmen called ‘The Devil’s Den’ (the whole neighbourhood seems to correspond to the Dark Lord’s household). We eventually find it, up a muddy lane off the A4, sitting in a field of kale. It’s a perfect little dolmen – we clamber through it, just to see what might happen….
Note: This isn’t the full set of images – they’re divided up into three sets – follow the next three links to get the full collection.
The full set of pictures of us in Avebury »
Strange Attractor »
Third Stone Magazine »
Get print quality versions of these photos on topfoto.co.uk &raquo

Men on the hill 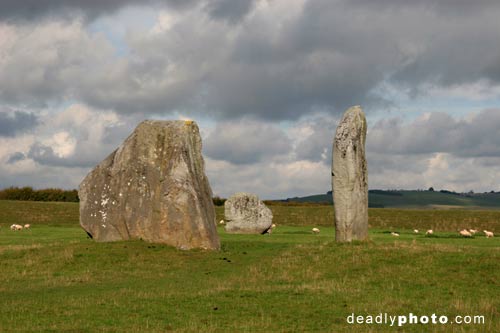 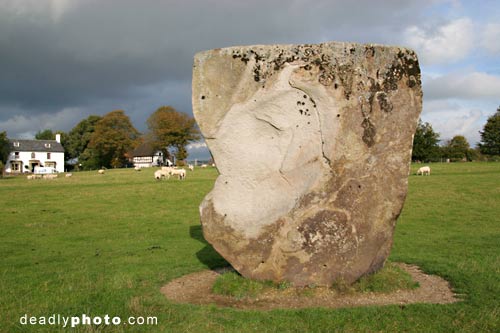 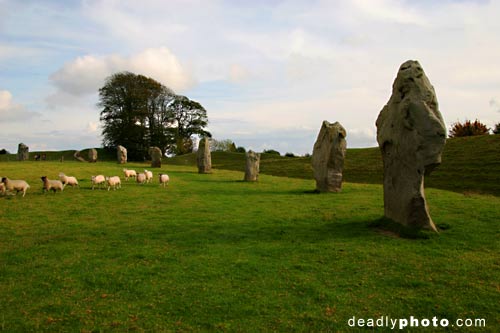 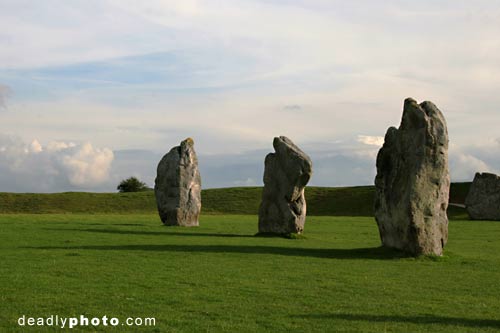 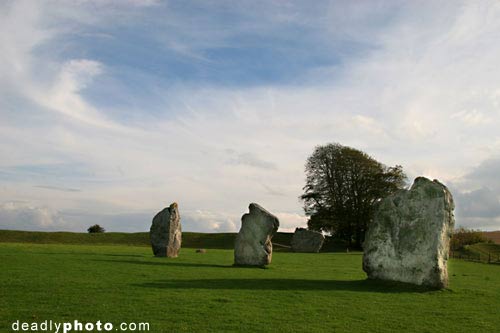 Dave on the Devil’s Chair – by Mark Pilkington 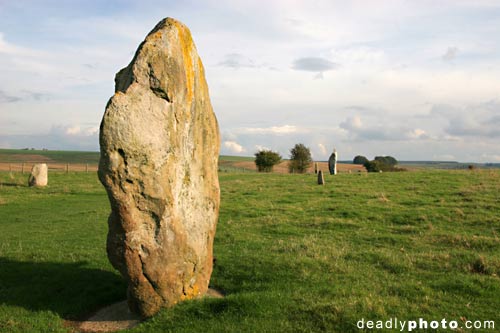 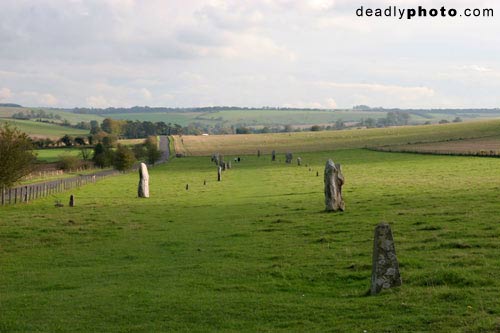 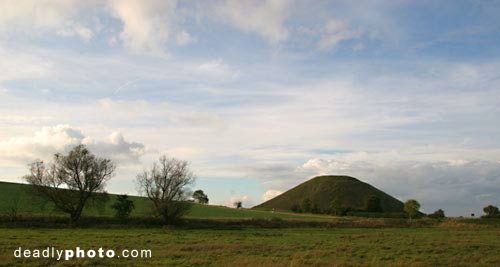 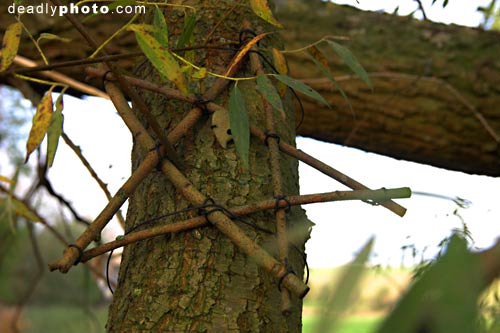 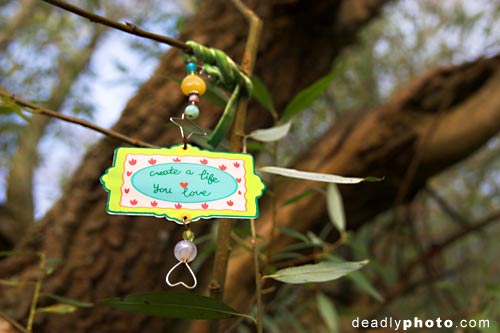 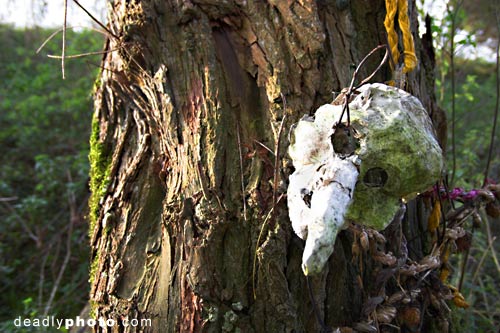 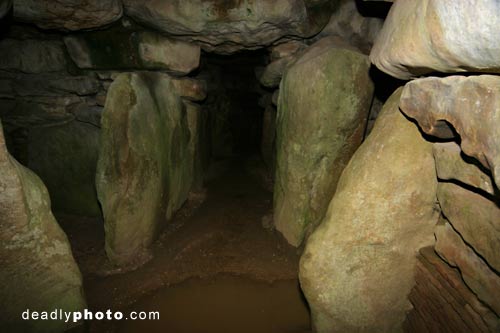 Silbury Hill, in the Distance

Get print quality versions on topfoto.co.uk &raquo
The full set of pictures of us in Avebury »
The full Avebury standing stones set »
The full River Kennet pagan shrine set »

Chief Bottle Washer at Blather
Writer, photographer, environmental campaigner and "known troublemaker" Dave Walsh is the founder of Blather.net, described both as "possibly the most arrogant and depraved website to be found either side of the majestic Shannon River", and "the nicest website circulating in Ireland". Half Irishman, half-bicycle. He lives in southern Irish city of Barcelona.
previous article
Bonfire Night In Lewes
next article
The Last True Story I’ll Ever Tell by John Crawford