Anarchy on the High Seas 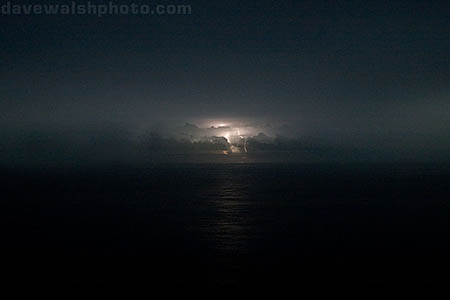 © Dave Walsh
Dave and Mir tell of pirate hideaways from on board the Esperanza:
The other day our ship, the Esperanza passed near the island of Sonsorol, one of the sixteen states of the Republic of Palau. But when we say “near” it’s very relative – the ocean is a very very big place, and we didn’t actually see it. Still, Sonsorol was there, just a tiny dot in the chart, so small. It could have been just a rock. But it is also the place of an utopian anarchist dream.

Some years ago, an article called Visit Port Watson!, a sort of tourist guide about the perfect lawless society on Sonsorol, was published in a book called Semiotext(e) SF. The article would have you believe that Sonsorol was a sizeable place, a pirate enclave with towns and farms where anyone could go and live, with all sorts of interesting ways of conducting an anarchist lifestyle (in the sense of personal freedom, rather than disorder). Alas, this Sonsorol dream isn’t quite the same as reality.*

Once upon a time, some of our Greenpeace colleagues tried to create its own utopia in another tiny point in the chart, dreaming of stopping oil exploration in the North Sea. The place was an islet called Rockall, west of the Scottish islands of St Kilda. Greenpeace occupied the island in 1997 with a survival pod manned by some intrepid activists and declared it the “Global State of Waveland” offering citizenship to anyone in the world who so desired. There must be still quite a few Waveland passports around. But Rockall is a bit of a tough place (it’s only 27 metres across and 23 metres high), with no fresh water and no ammenities, so we didn’t last long there. The exploitation of oil in the North Sea went ahead, production has since peaked and today it’s decreasing steadily. Now, however, Britain and other countries are preparing fresh claims for the sea floor around Rockall, and other parts of the Atlantic, as part of the UN Commission on the Limits of the Continental Shelf in a new race for resources.

There’s been other strange places that have claimed independence, seceded from parent states, and so on. There was the 17th century “Libertatia“, a potentially fictional pirate’s enclave in Madagascar, which made a point of freeing slaves. It apparently existed for twenty-five years – a classic, Temporary Autonomous Zone. In Australia, there’s still the Principality of Hutt River, a landlocked quasi-micronation within Western Australia. In Slovenia, a political art collective called NSK (Neue Slowenische Kunst – New Slovenian Art), which claims a sort of non-geographical statehood, even issuing passports and establishing embassies, including in Dublin. And we must not forget the micronation of Sealand, the former gun platform six miles off the coast of Sussex in England.

But that’s on land. The high seas belong to no one, and thus belong to everyone. The only law here is that which has been agreed by all nations.

Although here on the Esperanza, things are not so wild – certainly not some anarchist utopia. Life is strictly regimented, there are rules for most things and little signs everywhere saying what to do and what not to do and who can do it. There are signs telling you how to read signs. Favourites include the “salty” and “sweety” condiment racks and the now-vanished “Is your mother on board? No? Well clean up after yourself”. Everyone has a boss somewhere and we are all under the benign tyranny of captain Frank. That’s how ships work. Not much space for anarchy here – how would we get anything done?

Likewise, on international waters we need the UN Law of the Sea, otherwise it would be chaos. Nations of the world have agreed to trust each other in usage of the world’s oceans. The same is true for the coldest continent: the Antarctic Treaty’s stated objective “in the interests of all mankind that Antarctica shall continue forever to be used exclusively for peaceful purposes and shall not become the scene or object of international discord.”

The Southern Ocean Whale Sanctuary was put in place by the member countries of the International Whaling Commission. During the 1994 IWC meeting, 23 countries voted for the Sanctuary – only one voted against – Japan. Some countries – Iceland and Norway – choose to opt out of the IWCs regulations. Japan, on the other hand, decided to stay within the regulations, exploiting the loophole in the provision for scientific whaling, to the point where more than 1,000 whales are now targeted. To claim that the IWC allows this scientific whaling is a little disingenous, and most countries disagree with the Japanese ‘scientific’ whaling programme – including the IWC itself. Japan’s whaling fleet creates international discord by ignoring the spirit of the Antarctic Treaty (to which Japan is a signatory) by not filing an Environmental Impact Assessment, saying that it is only answerable to the IWC.
Dreams, as well as diesel oil, are what we are running on. Millions of people around the world believe in a green and peaceful world, a world where whales are not shot with explosive harpoons, where fossil fuels are part of the distant past, the global commons remain free and where we can solve conflicts without war.
And dreaming is free: no need to go live in a tiny island in the Pacific.

* (Back when Dave read about the Sonsorol pirate utopia, there was scant information about the real Sonsorol online, so he ended up registering sonsorol.com, and trying to give it to the people of sonsorol. He was a bit ahead of his time – no one from the islands seem to have been online a decade ago, and he didn’t realise that the four islands of Sonsorol of a total area of only 3.3 square kilometres, and that they have a population of just 39 people. Eventually, he let the domain go – sonsorol.com is now, luckily enough, in the right hands)

Chief Bottle Washer at Blather
Writer, photographer, environmental campaigner and "known troublemaker" Dave Walsh is the founder of Blather.net, described both as "possibly the most arrogant and depraved website to be found either side of the majestic Shannon River", and "the nicest website circulating in Ireland". Half Irishman, half-bicycle. He lives in southern Irish city of Barcelona.
previous article
Blather meets Out There Radio
next article
Zeitgeist: The Movie, 9/11, Andrew Keen and the impossible search for ‘the truth’