A Load of Blather: Unreal Reports from Ireland and Beyond – €9.99 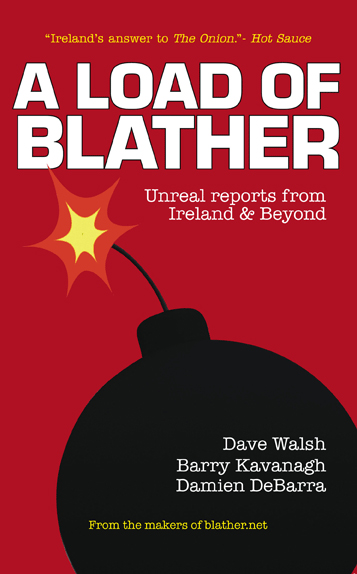 Eleven years, three convictions, two deportations, ten thousand pints, six barring orders and a legion of leather-clad groupies later, Dave Walsh, Barry Kavanagh and Damien DeBarra (the cheap tarts that brought you Blather.net) bring you their latest labour of love: A Load of Blather: Unreal Reports from Ireland and Beyond, the first book that anyone has been nuts enough to let them publish. Shamelessly re-working articles which have been online for years anyway, this magnificent tome is a veritable smorgasboard of smut; bursting out of its trousers with a great heaving cavalcade of paranormal events, superstitions, mysterious happenings, conspiracy theories, hordes of rampaging kangaroos in the Dublin hills, and the previously untold story of General Michael Collins’ forays into outer space. There’s even a bit about talking cows in there. If the lawyers haven’t cut it out. There’s guest articles too, from the likes of Sue Walsh, Oliver Bayliss and Dr. Stewart Roberts.

This scandalous pile of slanderous filth can be yours for a mere €9.99, a pint of blood and your firstborn child. Ok, we’ll settle for the money. Seriously, we need the money. Those drugs don’t buy themselves, no more than than the villa in Sardinia is going to build itself or the Blather private jet is going to refuel itself.
€9.99 – sure you’d barely buy two pints for that! And here’s the deal. We make more money if you buy the book from us. Yes dear, it will be on Amazon and in the shops, but we get less money into our grubby little hands if you buy it that way. Buy it straight from us and Blather.net makes some cash!

“When blather.net was spawned back in 1997, Dave Walsh, Damien DeBarra and Barry Kavanagh exhumed the lofty manifesto of the original Blather, founded in 1934 by Flann O’Brien. It would also be a “publication of the gutter” achieving “entirely new levels in everything which is contemptible, despicable and unspeakable in contemporary journalism”. Blather.net would have no principles, no honour, no shame. It would support the “fostering of graft and corruption in public life”, the “encouragement of humbug and hysteria”, and the “glorification of greed and gombeenism”. “

“Over ten years later comes A Load of Blather, gathering together the best of the best reports on paranormal events, superstitions, mysterious happenings, conspiracy theories, the hordes of rampaging kangaroos in the Dublin hills, and the previously untold story of General Michael Collins’ forays into outer space. Look no further – this is Blather.”

See photographs and read about the launch party on June 12th, 2008 at the Dice Bar, 78 Queen Street, Dublin and read Damien’s account of the night here »
Chapter List:
Introduction: Blather Doesn’t Care
Unidentified Feckin’ Objects
Slow Walking Banned in Dublin
Lepreporn
Angry Dreams
There are No Kangaroos in Austria
Fear and Loathing in Telemark
The Tomb of God
Lucy Dell
F*cking Magic
Wyrd!
The Blather Guide to Easter
The Dalkey Baby and the House of Horrors
Cannonballs from the Sky
Mayday!
Norway’s Psychic Princess
The 9/11 Conspiracy Theories
Superstitions of Christmas
The Anthropology of Roads
Clontarf-Based Science Team Find ‘the Clitoris’
Ancient Irish Astronauts
Most of the Internet is about Bobby Darin
IRA Announces Massive Redundancies
That Whole Father Pat Noise Phenomenon on Dublin’s O’Connell Bridge
The Taoist Problem Page
Entire Irish Nation Gathers on Beach to Futilely Shake Fists at Sellafield
Irishwoman Deafened by Ticking of her own Biological Clock
How to Fly a Building
Ireland’s Greatest Wits
Epilogue: Thundering Myeloma

“Just to let you know the book arrived safe and sound and is GREAT! An absolute hoot!” – Russell Clarke

“Saw the pics of the launch! It seams like it was great fun! Sorry I missed it! Loved the book! Was laughing outloud in the plane!” – Florencia

“Ah…thoroughly enjoying my read, there’s just not enough of it!” – Lee

All Nonsuch books are made from paper that is FSC (Forest Stewardship Council) certified or PEFC (Programme for the Endorsement of Forest Certification Schemes) certified, and from manufacturers have achieved ISO14001 status.

Chief Bottle Washer at Blather
Writer, photographer, environmental campaigner and "known troublemaker" Dave Walsh is the founder of Blather.net, described both as "possibly the most arrogant and depraved website to be found either side of the majestic Shannon River", and "the nicest website circulating in Ireland". Half Irishman, half-bicycle. He lives in southern Irish city of Barcelona.
previous article
I, Patrick. (Puke the Sixth)
next article
Diggin’ in the Dirt: Niall (sausage the fifth)