How I Helped Write the (Fictional) History of Clontarf 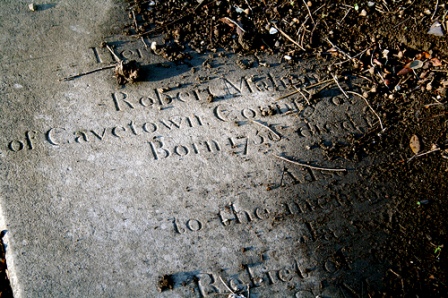 ‘No Thoroughfare on The Tram Road: History of Clontarf and its Environs’ by historian Val Lynch is a charming local history book which many northside Dubliners may have seen knocking around in newsagents and shops. Being from the area myself, I have an obvious interest. Whilst I am all for local history (something which we here on blather.net have always been fans of) one does have to worry when such books simply repeat stories about local legends and folklore. In the book I’ve just mentioned, there is an excellent example: the story of the ‘Mysterious Underground Tunnels Under Clontarf’.
The fact is, the story is nonsense. How do I know? Because I was part of the group that (inadvertently) made the whole thing up.

So, how did it happen? Well, at the time I was a semi-regular poster to an Irish discussion forum – the mighty p45.net (‘wasting time at work’) which is run by blather.net’s old friends Paul Clerkin and Mick Cunningham. Paul and Micko have a touch of “the mischievous” about them and, a couple of years ago, they decided to add a hidden forum to the site called ‘Urban Legends’. The express purpose of the forum was to create fictional news stories, leak them to the media and see if we could get them published.
The schoolboy pranks aside, the project had a serious point: to illustrate that most mainstream Irish media outlets would publish just about any piece of crap that they were handed without checking the stories for factual accuracy. And man were we right. As we reported here on blather.net in November 2003, in the article ‘Knick Knack Paddy Hack’ the project became frighteningly successful, with the final ignominious embarrassment of the Irish Independent when they published a story that Silvio Berlusconi (then the Italian Prime Minister) was demanding the return of Caravaggio’s painting “The Taking Of Christ” from the National Gallery in Dublin. It was the most famous in a long line of ridiculous stories which we managed to get into the media.
But recently, an even older one, (which I had all but forgotten about) re-appeared in a local history book ‘No Thoroughfare on The Tram Road: History of Clontarf and its Environs’ by Val Lynch. A friend mailed me to ask me had I read it. I said that I hadn’t, as I now live in London. He then scanned the cover (pictured below) and also page 26 (shown further below). I then commenced weeping laughing: the book repeated the story about the tunnels. 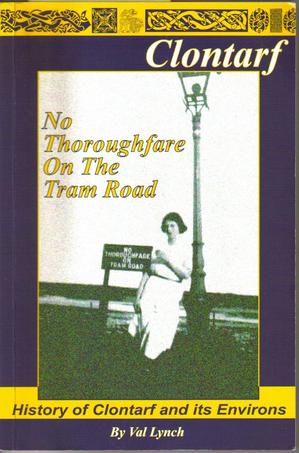 Here’s how it happened: Paul posted a thread to the forum with a draft of the original story on the morning of the 25th March, 2003. Later that day I asked him if I could (being from the area) add some ‘local colour’. This is what I posted next:

Mysterious underground tunnels under Clontarf
Excavation work on the Dublin Port Tunnel has uncovered mysterious underground tunnels in the Clontarf area. Surveyors on the project have stated that the network of tunnels which stretch for several miles are too deep to have been an old sewerage system and are obviously man-made. The tunnels were uncovered late last week and are currently being mapped and investigated by archaeologists from Irish Antiquities Division of the National Museum of Ireland [Ed – I used to work here] and surveyors from Duchas.
The construction company in charge of the project remains tightlipped but speculation is rife in the Irish historical community. According to Fergus McLinden, an archaeologist at Queen’s University Belfast “We’re guessing wildly here as we haven’t seen the shafts and tunnels yet but they may have been old mines of some sort. They’re quite deep underground and hewn out of solid rock”
“As to what else they could be, we have no idea. There were no major British military installations in the area so they’re unlikely to be escape routes. There is also some speculation that they may have been connected to the St Anne’s Park in Clontarf, but they seem too expansive for that.”
Local historian and politician Barry Ahern had an alternative theory to offer. “Clontarf Castle was originally an important Knights Templar preceptory, before they fell foul of the Inquisition. This was after they were famously rounded up on Friday the 13th, 1307, thus giving birth to the superstition concerning the date of Friday the 13th. What makes all of this particularly interesting is the local legends in Clontarf concerning hoards of buried treasure and valuables that the Templars may have secreted in the area at that time. No-one really has any idea what could have been buried by the Templars. Nearly everything has been suggested from hoards of coins to important documents and religious Templar artefacts. Some have even suggested that Clontarf could have been the last resting place of the Ark of the Covenant…” [Ed- I was reading Graham Hancock’s ‘The Sign and the Seal at the time and threw this in for a laugh]
Meanwhile further tunnelling is being carried out at a slower pace in case further tunnels are uncovered that may collapse or cause damage to the drilling equipment.
This is not the first hold-up on the Port Tunnel project. In recent weeks, contractors have had to investigate cracking in a house in Marino. CIE have also complained about the tunnel causing movement in the railway line on the main Dublin-Belfast line.

And that’s how the story went out. It took some time, but we knew that the story had succeeded when Paul was in a taxi some months later and, whilst driving through Clontarf, was told by the taxi driver the story of ‘de underground tunnels in Clontarf’. Paul tried to tell the driver that he’d been responsible, but to no avail. The driver was adamant.
And here it is again, five years later, taken from page 26 of the book. (Click to see the full image) 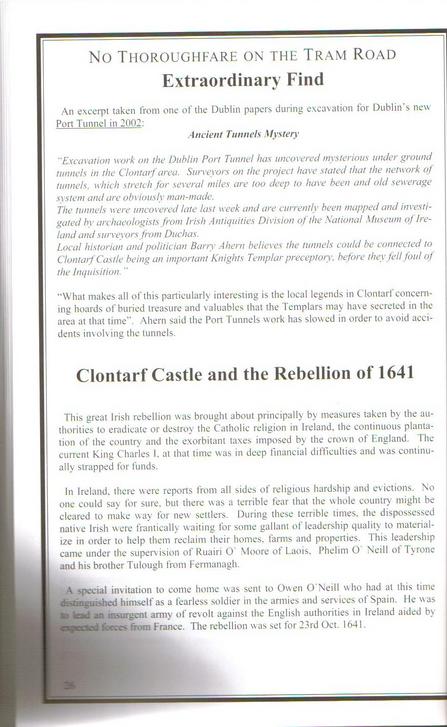 Perhaps the funniest part of all this is the fact that the ‘No Thoroughfare on The Tram Road’ book quotes a source named as Barry Ahern – this is an old friend of mine from the area. I added his name at the last moment, as I was in a rush and couldn’t think of anything else. We always said he’d be famous.
More Blather
Knick Knack Paddy Hack (or how p45.net made fools of the Irish Independent)

Damien DeBarra was born in the late 20th century and grew up in Dublin, Ireland. He now lives in London, England where he shares a house with four laptops, three bikes and a large collection of chairs.
previous article
Tasmanian devils – Cedric to the rescue!
next article
I, Patrick. (Puke the Sixth)