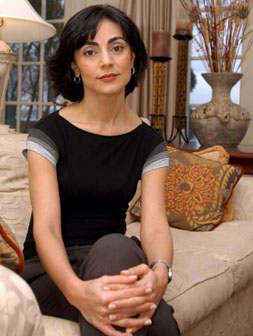 Who’s that riding around with a nuclear bomb in his motorcycle sidecar? This is the first in a projected 5-part series of articles for Blather.net on the subject of black market nukes. As you may or may not know, there is an international network of people selling blueprints and material for nuclear weapons on the black market. If you follow the news keenly, you may stumble across a report from time to time, but it seems this issue is not as much in the media spotlight as it should be. I’m going to try to draw various strands of the story together for you. I’ll be writing about A.Q. Khan, the father of the Pakistani bomb and ‘the merchant of menace’; Khan’s associates the Tinner family in Switzerland; ‘certain Turkish entities’, as George W. Bush called them; the CIA front-company connected to the outed agent Valerie Plame; and first and foremost, the story of the FBI whistleblower Sibel Edmonds (pictured), the subject of this first part.

In the aftermath of the terrorist attacks on the United States on 11 September 2001, there was a call for volunteers to help in the U.S. anti-terrorism effort. The call was not just for hotheaded recruits to join the army to shoot randomly in every direction, it was also for translators to work on intelligence data. Sibel Edmonds was an American citizen who began working at the FBI’s Washington DC Field Office on 20 September 2001, on a counterintelligence programme, translating wiretap recordings into English. She is fluent in Turkish, Farsi and Azerbaijani.
The intercepted phone conversations she was translating dated back as far as 1996. They were recordings of, among others, attachés of the Turkish embassy. Among the people of note these Turks were in contact with was the Pakistani General Mahmoud Ahmad, then the chief of the Pakistani intelligence agency, ISI. The General was closely associated with the Pakistani nuclear scientist Abdul Qadeer Khan, who made millions by selling nuclear secrets to Iran, Libya, North Korea and other countries, as he publicly confessed later (in January 2004) [1].
So, the FBI was eavesdropping on some of this network. But Sibel [let’s use first names; I’ll go insane typing ‘Edmonds’ all the time] was not on the job at the Washington field office for very long before she began to become aware of some extremely suspicious things going on in the workplace. First of all, she learned that one of her fellow translators was the daughter of a Pakistani embassy official who worked for General Ahmad. Some of the FBI investigators weren’t happy about this, but nonetheless the daughter was security-cleared to receive top secret information [2] [19].

Imagine 9/11 never happened. Before 9/11, the ISI was the section of Pakistani officialdom that was giving money to Al-Qaeda and the Taliban. (General Ahmad has even been accused of authorizing a $100,000 wire payment to Mohammed Atta, one of the hijackers, right before 9/11 [3][17]) That’s where the ISI was coming from. Now, we know that underlings of the aforementioned secret nuke dealer A.Q. Khan met Osama Bin Laden earlier in 2001 [4]. Imagine a different series of events: 9/11 didn’t happen, and instead the A.Q. Khan network eventually provided Al-Qaeda with full nuclear capability, funded by the ISI. Then the FBI would be listening to wiretaps of General Ahmoud organizing the ISI end of the whole thing, except the FBI translator who would actually be listening to the recording is the daughter of one of General Ahmoud’s lackeys! Would she not mistranslate or delete the recording?

That kind of thing

In reality, that kind of thing – deletion and mistranslation – was going on. Sibel discovered that her supervisor, Mike Feghali [5], was deleting translations from her computer, and that her co-worker, Melek Can Dickerson, was deliberately mistranslating wiretaps of certain people at the Embassy of Turkey and at Turkish cultural and lobbying organizations [6]. Melek was married to Air Force Major Douglas Dickerson, and the pair tried to get Sibel and her husband to join the Turkish lobby group the American Turkish Council (ATC), which was the subject of some of the wiretaps! Sibel decided to re-translate Melek’s translations, and in so doing found that they revealed criminal activity by Turkish nationals inside the U.S.A. Sibel has listed these crimes as: theft of U.S. nuclear secrets for sale on the international black market; corruption of the U.S. Congress; drug trafficking; and illegal arms sales using fake ‘End User’ certificates [7].

Sibel accused Melek of covering up illicit activity, but, on 22 March 2002, it was Sibel who had her contract terminated by the FBI. So she went to the U.S. Congress with the story. In June 2002, anonymous government sources were quoted in the Washington Post and the Associated Press saying that Sibel ‘had been disruptive, breached security, and performed poorly at her job’ [8], but this smear didn’t last for long. Sibel testified behind closed doors to the Senate Judiciary Committee and the 9/11 Commission. The Senate Judiciary Committee held unclassified hearings in June and July 2002. The FBI provided unclassified documents relating to the case, and admitted that Sibel had had ‘valid complaints’ about the conduct of her fellow translators and the management of her unit [9]. Next, in July 2002, she filed a lawsuit against the Department of Justice and the FBI for wrongfully terminating her contract. The Attorney General, John Ashcroft, responded by invoking the State Secret Priveleges act to gag Sibel from speaking about her work at the FBI (on national security grounds), and he asked that the case be dismissed, which the courts did in July 2004. She filed an appeal, and the same day the Office of the Inspector General (OIG) at the Department of Justice released an unclassified summary of a classified report on their investigation. The OIG concluded that ‘many of Edmonds’s core allegations relating to the co-worker had some basis in fact and were supported by either documentary evidence or witnesses other than Edmonds’ [10] and – I love this quote – ‘Rather than investigate Edmonds’ allegations vigorously and thoroughly, the FBI concluded that she was a disruption and terminated her contract’ [11].

At the hearing of her appeal in April 2005, press and public were barred from the courtroom, and, er, Sibel wasn’t allowed in herself. On 6 May 2005 her case was dismissed, and there were no reasons given why. The Supreme Court declined to review the decision in November that year [12].

The need to suppress all Sibel had learned may be because she implicated powerful U.S. government officials in the shenanigans at the American Turkish Council and elsewhere, but we’ll get to those individuals in parts three and five of this series.

In January of this year, Sibel spoke to the Sunday Times in London, and seemingly defying the gag order, revealed much to the journalists Chris Gourlay, Jonathan Calvert and Joe Lauria [13]. One of the Times pieces dealt with the FBI document 203A-WF-210023. That month, acting on an anonymous tip-off [18], the American human rights group the Liberty Coalition had made a Freedom of Information request for 203A-WF-210023 and were told by the FBI that it did not exist. But the Sunday Times were able to obtain a document signed by an FBI official showing that the file did exist. Sibel said to the Times journalists: ‘I can tell you that that file and the operations it refers to did exist from 1996 to February 2002. The file refers to the counterintelligence programme that the Department of Justice has declared to be a state secret to protect sensitive diplomatic relations’ [14].

Apparently the FBI counterintelligence programme that Sibel worked on began in 1996 if not earlier, and was wound up at the end of January 2002 [15]. So it seems the FBI are no longer investigating this dodgy network. And it’s not just Sibel who has spoken out about the criminal activity that the counterintelligence programme uncovered. According to the Dallas Morning News in February 2008, FBI employees have written anonymous letters, confirming Sibel’s story [16].

I’ll be returning to Sibel Edmonds’s case to look at the details of what she has revealed. You’re probably wondering what the wiretapped Turkish nationals were up to, exactly. You didn’t like the sound of ‘theft of U.S. nuclear secrets’ and you want to know more. But the next step will be to fill you in on the international network of A. Q. Khan. That’s coming in part two.