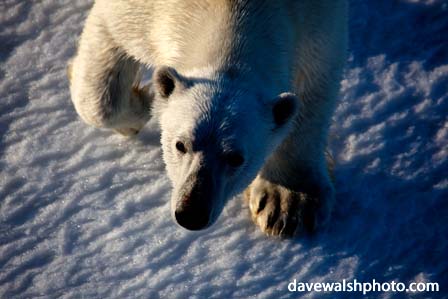 This was first posted as a blog on the Greenpeace Climate blog – with with my pal Nick Cobbings excellent photographs. I’m currently the blogger and press officer on board the Greenpeace ship Arctic Sunrise, off the coast of Greenland as part of a four month expedition investigating climate impacts in the Arctic.
It’s five minutes past midnight on board the Arctic Sunrise. The sun never sets at this time of year; instead it casts long late shadows on the ice, and turns the sea water and icebergs buttery yellows and infinite blues.

Some of us should be asleep, but few of us are – we’re pulled up beside a stunning iceberg, which has become known as ‘The Donut’, thanks to the circular hole formed by an exquisite archway of glacier ice.  I’m on the starboard bridge wing, looking at the Sunrise’s shadow play on the ‘berg, then reflection of that shadow in the water. Out of the corner of my eye I catch something yellow galloping along the pockmarked sea ice that stretches from the iceberg to the nearby coastal cliffs.  “POLAR BEAR, POLAR BEAR” I shout into the bridge.

The bridge erupts into a frenzy of activity.

I stick my head back outside. The bear has stopped, maybe 50m off the starboard bow.  Nanuk or Nanoq, the Inuit name for the polar bear or ice bear. Also known as Ursus maritimus, the sea bear. In northwestern Greenland, the Polar Inuit call the bear Pisugtooq; the great wanderer. To follow a bear, it is said, is to really learn something. I like what Pisugtooq means, but Nanuk rolls off my tongue a little easier.  Nanuk is sitting down, waving its head back and forth as it sniffs the aroma of humans and cooking that’s coming from the big green ship. Polar bears are curious animals, and it’s a fair guess that it has never laid its brown eyes on a ship before – not many ships have ever reached these waters. I don’t know if it’s a male or female. I’d hazard a guess of male, but not from any solid evidence. Kieran forwarded me an new story earlier about a Japanese zoo where keepers spent six months trying to get two polar bears to mate, before discovering they were both female.  Out of the bear’s line of sight, on the other side of the ship, we’ve a boat in the water, with Bob, Sarah, Eric, Alun and Stephen on board. They quickly choose to evacuate the boat, and get back on board the Sunrise safely. Up on around the bridge, Nick is to my left, shooting photographs on his telephoto lens. Stephen, still in his boat suit, joins the others on the bow with his video camera.  The bear moves forward, wading knee deep through a meltpool. It strides confidently up to the ship sniffing the air, and looking up at the little people above. Its massive forelegs are awe inspiring, ending in paws bigger than my head – these act as paddles, snowshoes, and seal-killing tools, thanks to huge reddish brown claws on each foot.  Nanuk’s coat glows golden yellow in the low sunlight. It’s commonly assumed that polar bears are as white as snow – not so. Instead, their fur – each hair of which is hollow, for insulation, is creamy if not yellow.  Now Nanuk is regarding the bow of the Arctic Sunrise with something more than curiosity. The deck that people are standing on is 4m above the ice, sloping outwards. Including the gunwale, the bear is looking up at about 5m of steel, sloping out over its head. It can’t be seriously thinking of jumping onto the ship, can it? I imagine the Arctic Sunrise arriving into port, with a pair of cartoon scratch marks descending to the waterline from an attempted ursine boarding. 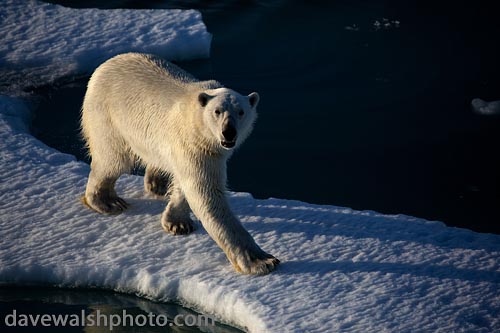 Nanuk seems to blink, change its mind, sniffs around a bit. I’m standing on the next deck up, so I’m close to 9m from the ice, or probably less than 8 from the bear’s head. I’m looking through my 400mm camera lens at its muzzle, which is stained red, presumably from the blood of seals. Nanuk looks back up the lens at me, the sunlight catching its eye as it regards my clicking camera with cold curiosity. Even with that much vertical height between myself and the bear, I am unnerved.  A sudden movement from from a crewmate below startles Nanuk, who spins away, splashing back into the water. The minor panic subsides, and it climbs on to the ice again. Then, showing only its right side, sits on its haunches, giving the Arctic Sunrise a doleful over-the-shoulder look. Then it stretches its back ramrod straight and aims its muzzle at the blue sky above.  I almost expect the bear to start howling. Instead, it seems to have turned itself into an olfactory antennae, getting its nose as high as possible. It looks dumpy – plump around its nether regions, like a bear wearing a bear suit to a fancy dress party. But Nanuk also looks graceful, regal, and at ease in its domain, and now, with its snout in the air, seems to have reached a kind of shamanic pose.  Nanuk’s forepaws come down on the ice again, and it starts ambling away. Without warning, it drops down on the snow, and spends the next two minutes rolling around on its back like a playful dog on a lawn, kicking its legs into the air, rubbing its fur onto the snow. Is it trying to cool down after all the excitement or drying its fur? Is it declaring its submission to the big green rainbow monster by proffering its furry belly? Or is it simply having a good time and wants to show off to the cameras?  After a few minutes of this, Nanuk sits up, looking a bit dazed and selfconscious, before wandering off across the ice. We continue watching through binoculars and telephoto lenses. A dark lump can been on the ice, between the bear and the cliffs of Cape Clay. It seems to be a ringed seal, pulled up on the ice.  Nanuk goes into stealth mode. We have problems telling the bear’s pale hump from the sunlit ice as it takes a winding route through the water towards the seal. We blink, and the seal vanishes. Nanuk appears, forepaws on the ice flow, sniffing the air, disappointed. Then it wanders off, in search of new adventures, and a late supper.  The ship’s engines start, and we leave. The is the bear’s territory, and we do not want to impose further.  -Dave  Footnote: This was the fifth of six polar bears we’ve seen since June 29th. The 1st was on the Arctic Sea ice, as written about by Melanie. We later saw a mother and two cubs in the distance on Petermann Glacier. Since the above encounter, Martin, Stefan and Geert saw a polar bear from the helicopter, clambering about on one of the McGarry Islands. 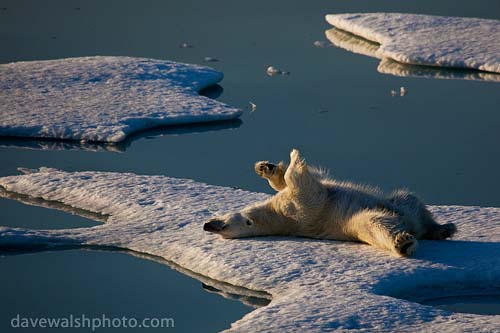 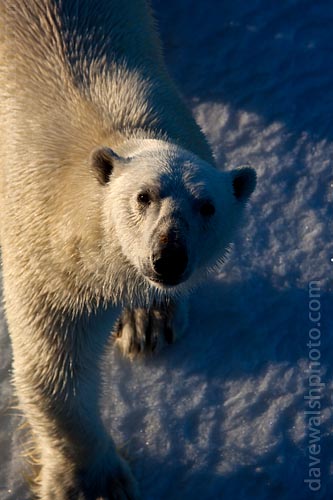 Chief Bottle Washer at Blather
Writer, photographer, environmental campaigner and "known troublemaker" Dave Walsh is the founder of Blather.net, described both as "possibly the most arrogant and depraved website to be found either side of the majestic Shannon River", and "the nicest website circulating in Ireland". Half Irishman, half-bicycle. He lives in southern Irish city of Barcelona.
previous article
Irish Round Towers Go Radio Gah Gah
next article
What do the Bremore Passage Tomb Complex (A National Treasure), National Treasury Management Agency and Treasury Holdings, all have in common?