Climate change in Ireland: The need to move beyond skepticism 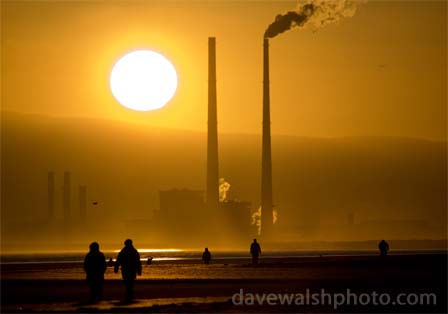 Photo: Dave Walsh. More about this image here…
Suffering from global warming fatigue? Considering the 30 percent drop in attendance rate at the Irish Skeptics talk on climate change in April, some might. Understandably so. Not only because of this feeling of having heard it all before… but also, living in Ireland even if you’re one of the most environmentally concerned citizens, you might still find it hard to be really upset about the temperatures getting warmer. Rightly so? Well, this was actually the question addressed by Professor John Sweeney from the Department of Geography, NUI Maynooth in his talk “Climate change in Ireland: The need to move beyond skepticism”.

Professor Sweeney was invited by the Irish Skeptics as a member of the IPCC (the Intergovernmental Panel on Climate Change) to tell us about the likely consequences that climate change will have for Ireland.
It will maybe surprise some Irish people to hear that Ireland has played a significant part in the global warming story. Not in causing it though… we’re a bit too small for that. But Ireland was there at the very beginning, when the climate change story all started. We have to go back to the year 1976, when the World Meteorological Organisation sent four people to Geneva and locked them in a hotel room for the weekend. There they were assigned two key questions: was the climate changing, and if so, should we be concerned?
According to Prof Sweeney, these were pretty radical questions – at the beginning of the 1970’s climate change was not an issue at all. As it happened, one of the participants was an influential Irish figure, senator James Dooge, described by Prof Sweeney as “perhaps one of the most important, prolific and distinguished scientists of the past generation”. Nobody knows what was said in this room at the time, but the four emerged with their final conclusion: yes, the climate was changing, and yes, we should be worried.
So that’s how it all started, with a significant Irish contribution, after which the story we all know began to unfold. A decade or so later (1988), the IPCC was formed, a first report was published in 1990 and the consensus emerged. Another two decades or so later, all the people involved (including Prof Sweeney) got the Nobel Prize for Peace (2007) for the critical role they played in warning us about our planet’s frightening future.
At this stage we don’t need the IPCC experts to notice that the climate is changing. Changing landscapes, melting ice caps, shrinking lakes, it is pretty obvious that the earth is warming up. In Ireland however, it is not so obvious. Or is it? Prof Sweeney tells us that changes are noticeable in Ireland too, and does his best to convince us that we should be concerned…
Temperatures
Temperaturewise, what’s happening in Ireland has mirrored what’s happening globally, he says. The country has just been lagging a decade or two behind (probably due to its surrounding seas acting as a buffer). He points out that globally the warming rate was 0.74 degrees over the past century, and in the past 50 years it accelerated reaching 0.128 degrees per decade. These figures may not sound that impressive, but Prof Sweeney tells us Ireland is now warming up three times quicker than the global average… as if the country was trying to catch up.
You might not have noticed Irish summers getting warmer. This is because so far summer temperatures have mainly increased at night, by one degree or so. While that does not appear to be such bad news, Prof Sweeney warns us that warmer weather, especially during the summer, might have some unwanted health effects. “Food-born disease and water-born disease may become more of a problem as temperature rises”, he says, though “we won’t have malaria and we won’t have tropical diseases for a long long time in Ireland”, he reassures us.
He also reminds us of the 2003 heat wave in France, which caused 30,000 deaths. He agrees that in this country we’re not there yet. However, believe it or not, the warmest day of the decade, probably of the century, which was the 13th of July 1983 (very noticeable day where Kilkenny saw temperatures up to 32 degrees) was associated with an increase in mortality. And apparently, we do get more warm days than we used to.
Prof Sweeney points out that in the past 50 years the number of warm days has doubled. Note that the definition of warm days for this calculation was a mere 18 degrees. And anyway, it is pretty clear that Irish people dying from high temperature is probably not the biggest concern in relation to global warming.
If anything, we should be more concerned about people dying during the Irish winter. According to Prof Sweeney, Ireland has higher winter mortality rates than Scandinavia – most likely due to bad insulation and poor fuel usage. Luckily, this may be about to change as well, as temperatures have also been increasing during the winter – Irish winters are projected to be 2 to 2.5 degrees warmer by the middle of the century.
Prof Sweeney is actually talking about ‘Cork like’ winters for the whole of Ireland, or at least the midlands, which again may not be such bad news, he agrees. “According to our management model, a 2.5 degrees increase would decrease cold-related mortality by 2 to 3 percent”. In any case we could certainly do with one or two more degrees during the winter, couldn’t we? So it is rather welcome news also that, as explained by Prof Sweeney, while the number of warm days has doubled in the past half century, the number of very cold days has been halved.

This article has been published in the September 09 issue of Science Spin.
This blog was published as part of Blog Action Day 2009

previous article
What do the Bremore Passage Tomb Complex (A National Treasure), National Treasury Management Agency and Treasury Holdings, all have in common?
next article
Blather.net at Dublin Paracon 2009