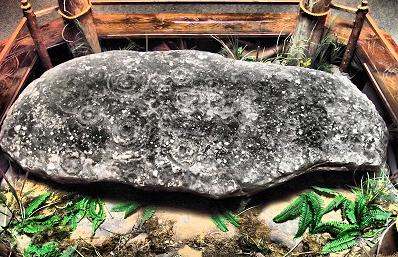 Archaeological batshttery, mumbo jumbo misinformation and outright lunacy based on fringe interpretations of a couple of websites and five minutes research by ill informed amateur web ‘journalists’?
It must be Friday, so.
It takes a quare and rare thing to confound the likes of us here at Blather HQ, but every now and then, we get a right doozie. Like this report of Irish prehistoric art turning up in Georgia, USA.

Apparently, it has been on display for a few years in the wonderfully named Funk Heritage Center, which contrary to its name, is Georgia’s ‘Official Frontier and Southeastern Indian Interpretive Center’.

Before this, it had apparently been lying outside in the campus of Reinhardt University and following a period in the Library, was moved into said Funk Center in 1999. The ‘Reinhardt Boulder’ as it is known was apparently donated to the university in the 1940’s, by the owners of the land from which it allegedly originated: ‘on a knoll overlooking the Etowah River in Cherokee County, Georgia’.

Not content with this, the nice people at the Funk Center have apparently been actively researching it in an attempt to uncover the meaning behind such designs and (notwithstanding decades of serious academic study in Europe: actual home to hundreds of examples of such prehistoric art and the general consensus that we haven’t a bog what these things actually meant) have stumbled upon the amazing fact that it ‘looks’ like Irish prehistoric art from the Bronze Age.

Therefore it *obviously* comes from here. Or was carved by people from here. Despite similar examples in Europe being several thousand years older then the earliest indigenous Indian tribes who once inhabited the area in which it was ‘found’.

In addition, they have come up with all sorts of meanings and interpretations attached to it, including (in no particular order) A star map, a regional map, a star-gate, lost symbols associated with the Canaanite god, Baal and/or, the lost city of Atlantis.

Nevermind the fact that these particular symbols just happen to be the most common universal neurophysiological motif found in prehistoric cultures all over the world, from Europe and South Africa, to Aisa and Australia. Nevermind that fact that even it it was real, this particular stone is likely to have been ‘liberated’ from its original context, wherever it may have been.

Nevermind the fact that despite all the legitimate expertise available in universities, organisations and research projects which focus on the topic around the world; they just so happened to find whatever legitimacy they needed from such sterling foundations as:

Nevermind all the above. Someone has gone to the trouble of doing a google search and come up with all the answers.
The trouble is though: when your entire lunatic fringe hypothesis is attributed to unnamed ‘innovative, but serious researchers’ and ‘shit you found internet’; then you’re going to run into problems at some stage. And when you bring in wild fantastic claims about prehistoric archaeology of a country on the other side of the Atlantic ocean, a country that happens to have electricity and access to the internet and a few people who actually know a thing or two about Irish archaeology; then you’re just asking for trouble.

So, no folks. These people have not discovered some miraculous link between Bronze Age Ireland and 20th century Georgia. They’ve done nothing of the sort. But there certainly is a funky smell about the whole thing.

In the words of Donnie Brascoe: ‘Its a fucking fugasi’.

previous article
Would you rob my grave as quick?
next article
The Lion and Unicorn Amnesty: A Plea for the Safe Return of England