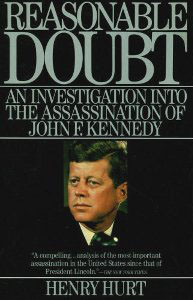 The other great general book about the JFK assassination is Reasonable Doubt by Henry Hurt. First published in 1986, this is the Owl Book Edition of ’87. Unfortunately it’s never been updated.

It’s more aggrieved in tone than The Kennedy Conspiracy, but then, Anthony Summers isn’t American.

‘Reasonable doubt’ is ‘the standard of evidence required to validate a criminal conviction in most adversarial legal systems’ (Wikipedia). Under this standard, the defence doesn’t have to provide an alternate explanation for how the crime happened, it only has to pick holes in the prosecution case. Hurt picks holes in the official (Warren Commission & HSCA) versions of the JFK assassination, and although his book isn’t explicit about this, the first 7 chapters are enough to raise reasonable doubt and acquit Oswald of all charges.

A second meaning to the title is that by raising so many questions and pointing out so many flaws in the official investigation(s), it makes it clear why a majority of Americans don’t believe the official explanations. They consider themselves to be reasonable . The truth, of course, may be as strange as the official version(s)… but Hurt’s job is to raise the doubt.

The regions of Oswaldian doubt we’re going to explore are: the single bullet theory (this blog entry); Oswald and the rifle (next time); James Tague (next time); and the Tippit crime scene (next time).

The reason for the single bullet theory (SBT) is that the Zapruder film moves at 18 frames a second, from which the assassination can be timed. There is no way that the gunman with the bolt-action rifle that was found on the 6th floor of the Book Depository could have hit JFK with one shot, then Governor Connally with another, in less than 2 seconds. It is not possible to fire that fast with that rifle. If the victims were shot by separate guns/gunmen, of course JFK and Connally could be hit within 2 seconds, or even simultaneously, but it could not be done by separate bullets from that one gun.

There were 3 spent cartridges found on the 6th floor, and a majority of witnesses heard 3 shots. These 3 shots had to be long enough apart in time to have come from that rifle, so one must have missed, another must have been the magic bullet of the SBT that injured both JFK and Connally, and the third must have been the head shot.

But is the SBT within the realms of possibility? If it isn’t, then there must have been more than one gunman. Hurt wonders what supposedly happened when the bullet hit JFK. Never mind Connally’s injuries, how did the bullet even get from JFK’s back to JFK’s neck? The Parkland Hospital witnesses thought the neck wound was an entry wound, not an exit wound. And the autopsy doctors ‘could not probe the back wound but a short distance; they even concluded … that the missile… must have fallen out of the back’ (p.43). In other words, there’s no actual evidence of a bullet path. And according to the description of some autopsy witnesses, the location of the back wound did not seem to be, as the Warren Commission (WC) had it, ‘in the vicinity of his lower neck’ (p.49), which it needed to be for an exit via the neck. The examination of JFK’s jacket and shirt showed ‘the bullet hole was between five and six inches from the top of the back of the collar and between one and two inches to the right of the midline of the clothing’ (p.49), which seems too low for the SBT. Dr. Charles Carrico testified to the WC that the neck wound was high – it was above the knot of JFK’s tie (p.60). There’s corroborating evidence: photos show there’s no bullet damage to JFK’s shirt’s front neckband (there’s only scalpel damage from the tie being cut off). How could a shot from above which goes into the back 6 inches below the collar emerge from the neck above the collar?

Another problem for the SBT is Connally, who apparently knew that ‘a bullet – moving faster than the speed of sound – reaches its target well before the sound of the shot’ (p.68). Connally’s story is that he heard a shot, turned to his right to try to see what was going on, then got shot himself. He has never believed that he and JFK were hit by the same bullet.

I’m going to digress a bit from Hurt now, to look at visual evidence of Connally.

Look at the Zapruder film (frames) and make your own mind up about Connally. It’s hard to time when JFK is hit because the Stemmons Freeway sign is in the way, but he’s hit by frame 225, when we can see him, his hands rising to his throat, reacting in pain (click to enlarge): 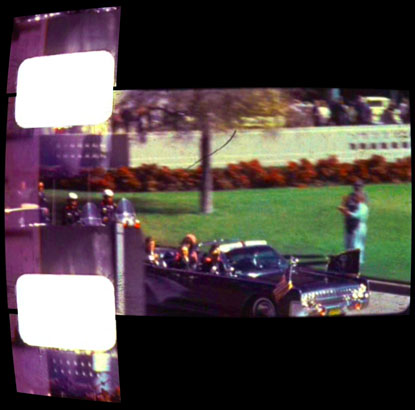 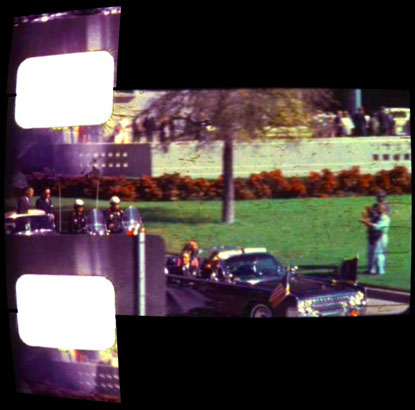 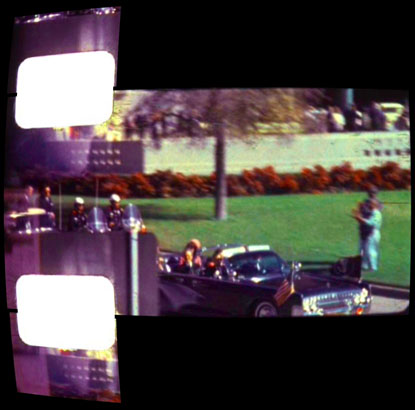 Connally of course is the man sitting in front of JFK. Can you see Connally’s lapel suddenly flip at frame 224? It can be hard to see, but someone has created an animated gif of 223-224. It looks like Connally’s hit, with some force. (Of course, if Connally was hit at frame 223, it doesn’t necessarily mean JFK was.)

What of the magic bullet itself, the bullet that supposedly went through both men? It was not extracted from Connally’s thigh – rather it was found in Parkland Hospital on a stretcher. It’s not even known who had been on the stretcher! It was found there and assumed to have fallen out of Connally’s thigh. This bullet has been shown to have been fired from the 6th floor rifle, but it could have been fired from it at an earlier time, then planted on the stretcher, seeing as it was on a busy corridor in a hospital where one witness says even Jack Ruby was wandering around. Similarly, the bullet fragments that came from the limousine were linked to the rifle, but the limo had also been left in a very public place, the hospital car park, so the fragments could have been planted (pp.69-71).

Dr. Vincent Guinn investigated the magic bullet for the HSCA. The neutron activation analyses he conducted led him to conclude that (a) the bullet fragments in Connally’s wrist were from the bullet found on the stretcher, (b) the fragments found in the limo and fragments from JFK’s head were from one bullet, and (c) all the fragments tested came from just two bullets (p.82). So, given that the stretcher bullet is linked to the 6th floor rifle, of which Oswald was the owner, it looked like Guinn backed up the SBT with evidence.

But there are problems with the evidence. The original wrist fragments tested in 1964 went missing, with no explanation, and the National Archives had given Guinn ‘the only bullet-lead fragments from this case still present’ (p.83). He received ‘several containers of fragments’ (p.83) but Hurt is not confident that anyone could know for sure what they were. What if Guinn was really testing fragments of the stretcher bullet that had never been in Connally’s wrist? Similarly, were the limo fragments ever genuine? They were only found ‘hours after the crime, after the limousine had been parked in a milling crowd at the hospital in Dallas and then flown to Washington’ (p.84). The official examination of the car only took place in Washington, while a Life magazine photo shows it had been ‘gone over’ in Dallas ‘by a variety of security people – including Dallas policemen’ (p.84, footnote) beforehand. The fragments were found after that. As for the fragments from JFK’s head, some of the medical evidence went inexplicably missing too, including JFK’s brain.

The ‘most astounding deficiency’ (p.85) in Guinn’s analyses, according to Hurt, was that they were based on unique characteristics of the batch of ammunition. Guinn was under the assumption that these bullets were only made by the Western Cartridge Co. in 4 production runs in 1954. Guinn could tell the 4 production runs apart regarding ‘elements in the metal’ (p.85), but he was not aware of an FBI document in which the Western Cartridge Co. were interviewed, and they said they made the same ammunition for the Italian government during World War II, and after the war it was sold to US gun dealers (p.85). Perhaps the ammo he tested did not have a unique elemental makeup at all. Different rounds of identical ammo do not help link specific bullets to specific wounds.

Next time: Oswald and the rifle; James Tague; and the Tippit crime scene.

I’m not sure who the bystanders are in the Zapruder frames reproduced above, but beyond the confines of these book reviews, I’ve been looking at many of the bystanders and witnesses of Dealey Plaza, all historical figures in their own right, and all the world’s a stage. I’ll introduce some of these to you in due course.

Watching the Z-film (check this version), and knowing the names of people, and some things about them, I see a film that has different levels to it. The scene becomes more human. The murder occurs in the foreground of a tableau vivant, a pageant of the living, a scene of Babushka Ladies and Umbrella Men.