The Blame Everyone Game 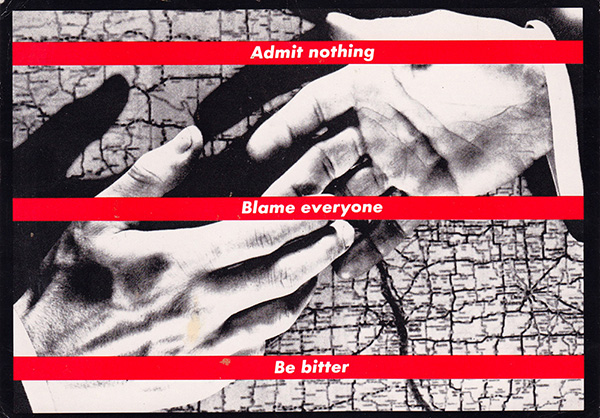 I cycled through the city, dodging broken cobblestones and feckless drivers. Somewhere in the back of my mind, a shapeless process was churning on human rights and the shameful geopolitical tug-of-war that is driving the deplorable treatment of the refugees trying to reach Europe.

I paused at a crossroads. An image of a postcard flashed into my head. A postcard I received from my friend Donal, years and years ago. A black and white image showing two hands barely meeting across a map, with three commandments in red strips overlaid:

That card, I thought.

That evening, when clearing through old files, my hand found its way into a battered envelope of ancient correspondence. The first thing I pulled out was the “Admit nothing” postcard, postmarked 26 July 1993, and addressed to my first Dublin address, a shared house in a dull suburban sprawl. Synchronicity, or mere coincidence?

Donal wasn’t sending me a “wish you were here” message, from some sunny location. No, he was suggesting a rendezvous with other friends at a pub in Thurles, Co. Tipperary, in Ireland, during the annual madness of the Féile music festival. I hadn’t seen the card in years. I didn’t even know I still possessed it.

The card itself is memorial to a different time – when my generation were able to organise themselves without mobile phones, email or social media. We would make an arrangement to meet, and perhaps we manage to keep it. Or maybe some bizarre adventure would befall us on the way, and we would turn up bedraggled some days later with a real story to tell, verbally, sans selfies or updates or tweets.

At the time, I remember being amused by the theme of the postcard. Its red and black colouring and grittiness fell right into the dystopian demeanour I’d been carefully cultivating, and matched the aesthetic of the art and music that interested me. I regularly upset one of my housemates – a Garth Brooks fan from Limerick – by playing bands like the Fatima Mansions and Einstürzende Neubuten, both of whom were engaged in producing music that critiqued the status quo, in very different ways. Berlin’s Neubauten were cranking up instruments from found, post-industrial trash. Cathal Coughlan, an Irish migrant to London was railing against Ireland, England, everything:

And then I was reading all the wrong stuff at the time, whether it was George Orwell, EF Schumacher, Robert Anton Wilson or the pantheon of contemporary cyberpunk authors, lead (however unwillingly) by William Gibson. Although I was a country-boy through and through, the card appealed to whatever I post–adolescent state I was in at the time. Perhaps I was rebelling against my corporate job, which involved running around in a spacesuit making Pentium silicon chips for Intel, or my idyllic, bucolic upbringing.

For whatever reason, the image of the card stuck in my head. And now, 22 years later, it sits on the desk beside me and I am looking at it differently. For a start, I realise that the card depicts an artwork, “untitled, 1987” by American conceptual artist Barbara Kruger. I also realise that while the postcard amused me when I received it, I was neither mature enough nor well informed enough to understand the subtle levels of satire that it delivered.

With my old, wiser but no less cynical eyes the card seems especially apt, given the bitter, irresponsible and ridiculous atmosphere that currently pervades European and global politics.

I wonder what Robert Schuman, a parent of the European Union, would have thought of today’s situation, with the member states holding summits near around Brussels’ Place Schuman to quibble over miserly refugee quotas, and attempting to undo the cross-border interdependence that Schuman saw as being key to peace through the continent.

“Europe will not be made all at once, or according to a single plan. It will be built through concrete achievements, which first create a de facto solidarity.” – Schuman

As I write, we have seen countries halting international rail travel to help stem the wave of desperate refugees trying to enter their countries. Hungary erected steel fences to keep refugees out, while others are making noises about the dismantling of free travel within the Schengen Area. It feels like the spirit of European cooperation is being deliberately, and arrogantly forgotten, and that nobody is willing have the balls do deal with the crisis. Germany doesn’t want to be the leader, but at least it is committing to take in 800,000 refugees (yet it closed it borders too, after pressure from Bavarian leaders). Other countries appear to be either waiting to follow Germany’s lead, or complaining that Germany is being bossy. Just like the Barbara Kruger postcard suggests, everyone seems to waiting around, passing bitter comments about their neighbours (looking at you, Viktor Orban), admitting no responsibility and blaming each other for either the continuing war in Syria, or the growing flow of refugees crossing their borders.

This week, Vladimir Putin turned up at the UN on Monday for the first time in a decade, where he and Obama played the “blame game” over Syria (while carefully missing each other’s speeches). By Wednesday he got a “go” from Russia’s parliament to carry out airstrikes in Syria and was bombing targets unknown on Wednesday afternoon. And he blames the west for it all.

European nations are currently flirting with contravention of Article 31 of the 1951 Refugee Convention, which states:

“The Contracting States shall not impose penalties, on account of their illegal entry or presence, on refugees who, coming directly from a territory where their life or freedom was threatened in the sense of article 1, enter or are present in their territory without authorization, provided they present themselves without delay to the authorities and show good cause for their illegal entry or presence.

European countries may not be imposing penalties, but they are not making it easy for refugees, who are expected to literally scale walls – of water, wire or concrete to get into the EU fortress, if they wish to be considered for asylum.

It appears to me that European political behaviour – and to be honest, much of the personality-driven political or military truculence worldwide, whether it’s in the Ukraine, Syria or elsewhere is evidence of at least some of the players – is driven by some unfinished business with the adolescent male ego, even if the individuals themselves driving the problems in their sixties. Something has to be done with all that investment in weaponry, and all that bottled up testosterone or some sad boredom of unproven warriors.

In the 22 years since I received the postcard from Donal, I have changed. So have the musicians I still follow. A recent body of work by Einstürzende Neubauten, commissioned by the Belgian town of Diksmuide to mark the centenary of the ‘outbreak’ of World War I, titled Lament is created with more distance to Germany’s wars and division into East and West than the early Neubuaten works. Neubauten’s organic cacophony of noise has not ceased, but their subtle appraisal of the world around them has. Live on stage, during one of the opening pieces of music, Kriegsmaschinerie, Blixa Bargeld holds up a series of cards, rather than singing, that read:

“War does not break out; it waits, for a singular but thousandfold: Hurrah. If something in its environment changes, only a little at first. It regains its old strength from debilitating disappointments; shredded hopes, false blame, and fatalism from long circulating lies in the name of religion, rotten debris which must be washed with blood, so that it might seem useful again. It lifts itself up slowly as if its joints were rusty… and out of practice. ”
“War does not break out, and it is never caught or chained; it moves”
– Einstürzende Neubauten, Kriegsmaschinerie

World War I may have ‘officially’ started with the shooting of Archduke Franz Ferdinand of Austria in Sarajevo on June 28 1914. Yet European nations didn’t suddenly plunge into war over one shooting – the evolving international environment was becoming ready for war, was constantly changing, and tensions were building long beforehand. German and the Allies may have been simply waiting for an excuse. History doesn’t like this messiness; we’re told that the archduke and his wife were shot, and all hell broke loose. World War II ostensibly broke out when Germany invaded Poland after falsely claiming that Poland attacked it first. Again, things had been happening for a while. Well before then, the Spanish Civil War had taken place; Japan had invaded China and had clashed with the Soviet Union. Germany had annexed Poland, Italy had invaded Ethiopia, and Czechoslovakia had been invaded and broken up by Germany.

Today we have wars in Ukraine, wars in Syria, Iraq, Afghanistan, Libya, Yemen, the Turkish-PKK conflict, Israel and Palestine. There’s the Boko Haram insurgency, along with numerous cross border African conflicts. A review of the Wikipedia entry on “Ongoing Armed Conflicts” is dismaying – it looks like the entire planet is fighting. Russia, EU countries and the US have amongst others have either been instrumental in starting or supporting these wars, or neglectful in doing anything to stop them.

I’m sure someone can put me right, and tell me that we live in a peaceful time. But I wonder, today, as Russia starts its bombing campaign in Syria, how this week, this month, this year, and these events will be positioned in future human history.

Admit you know nothing, take responsibility, be generous

Chief Bottle Washer at Blather
Writer, photographer, environmental campaigner and "known troublemaker" Dave Walsh is the founder of Blather.net, described both as "possibly the most arrogant and depraved website to be found either side of the majestic Shannon River", and "the nicest website circulating in Ireland". Half Irishman, half-bicycle. He lives in southern Irish city of Barcelona.
previous article
Gorse: Symptoms of the Subterranean
next article
Dublin: All Stops to the Point