I’m in this week’s photo, which was taken by Ian Brunswick.
I had two musical jobs this week. I DJed at a place called Indigo with Leon, a friend from London (newly moved to Oslo). I also gave a half hour performance of my songs at Blindern to International Summer School (ISS) students.

Indigo is a cafe-bar for the summer, but normally it is an art school. Its arty riverside atmosphere encouraged a great night to occur, one which us tired DJs thought took a long time to get going! But Oslo friends came along, as well as ISS students discovering the city, and two groups of people celebrating birthdays. And DJing can be a nice deal in generous Norway. We got free food, free beer, and all the cover charge money. In return, people got to hear exciting music (electro, funk, afro-beat etc.), and we tried very hard to keep them happy and dancing. Afterwards I drank with the barmaids, till about 9am! I made some amusing films on my now-functioning telephone.
My contribution to the ISS student performance series was to play the grand piano and sing five songs. I hope these songs will make it onto a third Dacianos album. I’d like to record them. I began with “In A Child’s Hand”, which I didn’t really enjoy playing but it’s a good one to warm up with. “Ancient Invasions” was better. It’s a kind of raw and intimate song, and I tap my foot and clap in it, so it’s like a work song. When it finished, I heard someone at the back say “Wow”, which must mean it was effective. I don’t remember much about “All You Can Do Is Love, The Rest Is Out Of Your Hands”, so I probably didn’t make any mistakes. The next song was “The Atom Time”, during which I felt like each arpeggio I was playing was kind of disintegrating. But I got there in the end. The last song was “Lucette And Céline” and I prefaced it with a little speech explaining who Céline was. Some girls afterwards told me later in the evening that they were singing it to themselves. I find it hard to believe it’s catchy! The feedback from people was interesting though. More than one person said I was “expressive”. I suppose I must be able to express certain things in music that are difficult or impossible to say in day-to-day life. Doing this show reminded me that the music establishes a kind of intimacy with people that wouldn’t exist otherwise, and it feels good to give. So even though Dacianos isn’t upbeat music like the stuff I DJ, it feels more rewarding. 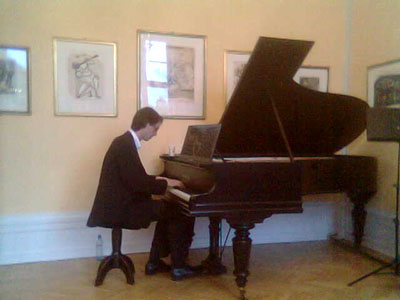