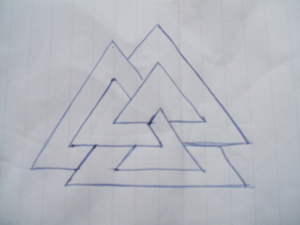 More about the magic symbol. This time I can’t pretend it’s too much of a secret. The editor of blather.net greased up his research elbows and emailed me some pertinent information about it, thus rousing me from my drunken squalor.

Whatever the symbol was called in Viking times is unknown. Modern scholars call it the Valknut (from the Old Norse word valr, meaning “slain warriors” + knut, knot). We know this symbol is associated with funerals, from where it appears. For example, the Viking Ship in which the pot lid was found, the Oseberg Ship, was found in a burial mound. It also appears on rune stones associated with Odin.
You’ll notice that it’s three interlocking triangles with nine points, thus suggesting the magical significance of the numbers three and nine. The latter number has particular resonance, as there are nine worlds in Norse cosmology.
In modern times, you may see the symbol being used by German neopagan groups such as the Ásatrú. I’m sure I’ll start receiving emails from neopagans now, just as my blog entry about Norwegian women led to emails from not only would-be lovers but self-professed vampires. *Sigh*.
Sources:
altreligion.about.com
wikipedia