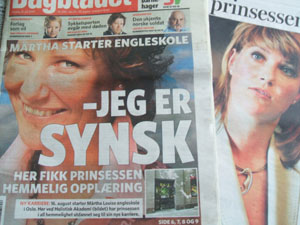 At last, something actually happens in event-shy Norway. Princess Märtha Louise, 4th in line to the throne, has declared “I am psychic” and is opening a school to teach people how to communicate with angels. The princess has been in contact with winged celestials, having previously had her third eye opened by communicating telepathically with horses.

Märtha Louise, whose tax returns for last year, according to Dagbladet, show net assets of over 6 million Norwegian kroner, is setting up the school with Elisabeth SamnÃ¸y, a 39-year-old former assistant shipsâ€™ mechanic, who registered assets of zero (her surname the papers have also spelled â€œSømnøyâ€, but not â€œRasputinâ€).
The school is called Astarte Education (they have a website), named after Astarte, goddess of fertility, sexuality and war. Fertility is mentioned on the website but thereâ€™s no mention of sex and violence. Interestingly, the horse is one of Astarteâ€™s symbols; the fact that this does not warrant a mention may indicate the Princess doesnâ€™t know.
The unaccredited three-year course presents a programme in which the first year focuses on [energy] readings, the other on healing and the third on [angel] contacting. That costs 24,000 kroner a year [3000 euro]. The school starts up on 16 august. The psychic duo write â€œThrough meditation and self-development you can come in contact with the true youâ€¦ [You will start to] live from your own strength and your essence. When you do that, your life changes from a life lived out from othersâ€™ point of view, to becoming a life that is created such as you will have itâ€ (my translation). Communication with angels will apparently help this development.
The princess seems to have always been headed this direction, or at least interprets her previous life this way now. She has this magical memory of her childhood: â€œI remember particularly one time I met a foreign lady when I was little. I went over to her and said that she didnâ€™t need to be sorry for her man, it will be well. The woman dropped her chin in disbelief and wondered who it was who had told me about her. It became a big commotionâ€ (my translation).
A horse rider at competition level, Märtha Louise has said in the past that she wordlessly communicates with horses, but she has also said it is good that horses take her as she is, and are unoccupied with her status as royalty. Perhaps this is a telling point.
My two kroner:
I note a contradiction in what Märtha Louise and Elisabeth are offering. By believing that there is a â€œtrueâ€ self, one is denying the notion of free will. If one has a true self, it is oneâ€™s innate nature and therefore there is nothing one can do to change it. Yet they are offering change, towards life as â€œyou will have itâ€, i.e. freely chosen. The self-created individual and the innate â€œtrueâ€ self are irreconcilable opposites. But maybe this really has nothing to do with the make-up of the self in any kind of philosophical sense. Letâ€™s imagine for example you are a princess, raised with a defined role, feeling like youâ€™re living your life from othersâ€™ point of view. You have felt since childhood that this perhaps was not the â€œrealâ€ you. When you get to your mid thirties, you might be inclined to finally cast off that imposed role and do what you have wanted to do all along? Like express something wild, esoteric, imaginative?
Why is it that people with 24,000 kroner to burn a year are not living life as they would have it? What is it that needs â€œhealingâ€? Now, I may be just a speck of dust on the grimy windscreen of the universe, knowing more about dead flies than angels, but I’m of a similar age to the princess, and speaking from my own personal experience here, I have no money at all, but do more or less what I want to do in life. Perhaps there is an inverse relation between wealth and freedom, and in the absurd world of royalty, this disharmony is accentuated.
Part 2.
Postscript.