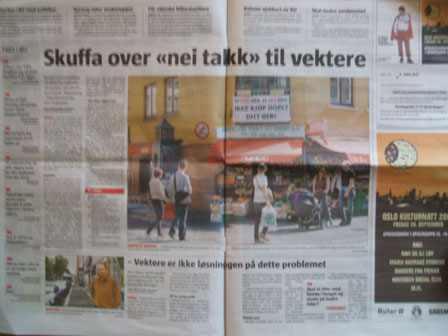 In this page of the newspaper Østkantavisa you can see my street, and my local grocery store. If you click the image it’ll enlarge, and you’ll see that above the shop is a banner with the words “Vi bor her. Vis ser deg. Ikke kjøp dopet ditt her!”, which means “We live here. We see you. Don’t buy your drugs here!”

Recently in passing I reported that 48 hash dealers were arrested in my area, thus removing the street trade. Apparently they have all been deported. I’m told by someone who was friends with a dealer a while back that these guys come into Norway from places like Nigeria and to avoid instant deportation claim to be under 18. They are then sent to immigrant camps way up north to be ‘processed’. Being in reality over 18, they escape from the camps, and come down south to Oslo where they find themselves at the mercy of the drug trade, i.e. the only people who can employ them. So they start dealing on the street. When they’re caught, they are simply deported.
One day after the mass arrests I saw two African guys hanging around by the bridge. Fairly soon, the numbers of new street dealers came to equal the numbers arrested and we’re back to square one. This bunch are a little more subtle, though. They don’t ask if you want to buy all the time; they tend to stand mute.
But there’s a local ‘action group’ (hence the “Vi bor her” poster), whose spokesperson seems to be someone called Ulla Kusnitzoff. Hmm, sounds like a machine gun… Anyway, this group has demanded that the police provide foot patrols in the area. The cops (who a friend told me last night are “practically on strike”) replied that they haven’t got the money to give that service, but offered to pay for a private security firm to do it, which would cost far less. The local government (district council) have declined this offer, which explains the “Nei takk” (“No thanks”) you see in the newspaper. Paal Haavaarsen, the Arbeiderpartiet politician, told Økantavisa that the private security firms do not have “the necessary competance to carry out such an exercise”.
When the police have shown up, their investigation techniques don’t seem to have been more advanced than racial profiling. A Norwegian I know who happens to have black skin was searched by police outside our bar on Friday night.