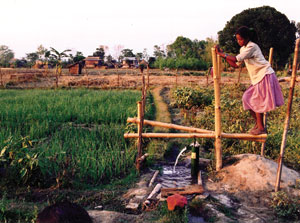 (Photo: Design for the other 90%)
I’m adding ‘Norwegian inventions’ as a new category in the North blog. There aren’t going to be that many inventions to cover, but this must surely be the greatest: the treadle pump, invented by Norwegian Gunnar Bårnes in 1980.

The fundamental thing that will get a subsistence farmer out of poverty is the control of the water for the crops. Now, this can be done without some massive dramatic project that will cost billions. So no big dams. It can even be done without diesel pumps or anything complicated like that . Because Gunnar Bårnes’s pump is a simple thing for subsistence farmers and it’s powered by walking feet.
And it’s affordable. Scientific American in the special issue of september 2005, ‘Crossroads for Planet Earth’, explained that the pump costs $25 and can irrigate half an acre, 1,500,000 Bangladeshi farmers have purchased treadle pumps, $49.5 million was the total investment in the pumps, $150 million was the total increase in the farmers’ annual income and $1.5 billion would have been ‘the cost of irrigating the same farmland with a conventional dam and canal system’!
In the relevant article in that magazine, ‘The Big Potential of Small Farms’ by Paul Polak of International Development Enterprises [IDE], Polak paraphrased the words of Nobel Peace Prize winner Norman Borlaug: ‘[Borlaug] was recently asked what wealthy countries should do to reduce hunger in the world. He said that they should send food during emergencies but that the long-range solution is revolutionizing agricultural production, especially among subsistence farmers in developing countries. This plan would not only increase food supply but also create jobs and generate new income from selling excess grain’.
I can’t find anything online about Gunnar Bårnes himself, but his wife Clårissa Barnes wrote on ponoko.com in 2007: ‘my husband, Gunnar Bårnes, was working for the Lutheran World Federation program in Bangladesh (Rangpur/Dinajpur Rural[previously Rehabilitation] Service) when he came up with the treadle pump. IDE came along later and did a great job of marketing it in Bangladesh, and introducing it to other countries. Other groups, like Enterprise Works, have also been working with the pump. Many modifications to the basic design have been made along the way. The original pump did include a smaller cylinder for wells, a bigger one for lifting from open water, and a spout for household use. No patent was taken out at the time of invention, so as to not inhibit all the small local shops who were turning out the mild-steel cylinders and help the spread. And it has spread!’
From a letter Clarissa wrote this year to Heifer International, published on heifer.org, she gave her address as Dickson, Tenn., so perhaps that’s where the great Gunnar Bårnes is now, presuming he is alive.
Update: Clarissa Bårnes sent me a very nice email, writing “Thanks for getting facts straight – and Gunnar is very much alive in Dickson, TN”.

Contact him here.
previous article
Dacianos in Skien
next article
The Norwegian Way