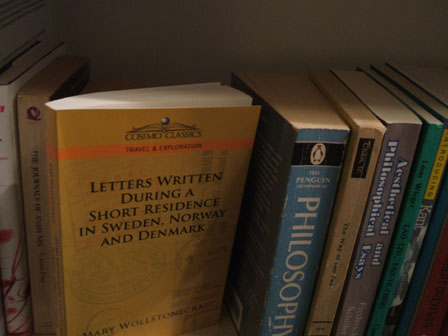 Mary Wollstonecraft, remembered for A Vindication of the Rights of Woman (1792), and for having died from giving birth to Mary Shelley, also travelled through Scandinavia in the summer of 1795, and wrote of her experiences in Letters Written During a Short Residence in Sweden, Norway and Denmark, which I’ve been reading. Here’s some excerpts for you…

The northern origin of humanity
(from Letter V)
‘So far from thinking that the primitive inhabitants of the world lived in a southern climate, where Paradise spontaneously arose, I am led to infer, from various circumstances, that the first dwelling of man happened to be a spot like this which led him to adore a sun so seldom seen; for his worship, which probably preceded that of demons or demi-gods, certainly never began in a southern climate, where the continual presence of the sun prevented its being considered as a good; or rather the want of it never being felt, this glorious luminary would carelessly have diffused its blessings without being hailed as a benefactor. Man must therefore have been placed in the north, to tempt him to run after the sun, in order that the different parts of the earth might be peopled.’
What is different about Norwegians
(from Letter V)
‘Behold us now in Norway; and I could not avoid feeling surprise at observing the difference in the manners of the inhabitants of the two sides of the river; for every thing shews that the Norwegians are more industrious and more opulent. The Swedes, for neighbours are seldom the best friends, accuse the Norwegians of knavery, and they retaliate by bringing a charge of hypocrisy against the Swedes.’
The girls of Tonsberg
(from Letter VIII)
‘I had expected to meet some company; yet was a little disconcerted at being ushered into an apartment full of well-dressed people; and, glancing my eyes round, they rested on several pretty faces. Rosy cheeks, sparkling eyes, and light brown or golden locks; for I never saw so much hair with a yellow cast; and, with their fine complexions, it looked very becoming. These women seem a mixture of indolence and vivacity; they scarcely ever walk out, and were astonished that I should, for pleasure; yet they are immoderately fond of dancing.’
A guide to Oslo
(from Letter XIV)
‘Christiania is a clean, neat city; but it has none of the graces of architecture, which ought to keep pace with the refining manners of a people – or the outside of the house will disgrace the inside; giving the beholder an idea of overgrown wealth devoid of taste. Large square wooden houses offend the eye…’
Inquiries after monsters
(from Letter XV)
‘I almost forgot to tell you, that I did not leave Norway without making some inquiries after the monsters said to have been seen in the northern sea; but though I conversed with several captains, I could not meet with one who had ever heard any traditional description of them, much less had any ocular demonstration of their existence. Till the fact be better ascertained, I should think the account of them ought to be torn out of our Geographical Grammars.’
The White Cliffs of Dover
(from Letter XXV)
‘…now I have only to tell you, that, at the sight of Dover cliffs, I wondered how any body could term them grand; they appear so insignificant to me, after those I had seen in Sweden and Norway.’