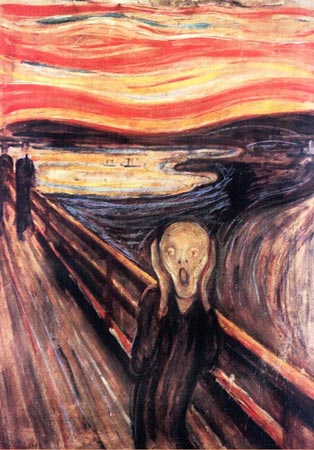 In my blog entry of 6 March 2006, I described my attempt to go to the spot on the hill of Ekeberg overlooking Oslo which provides the setting for Scandinavia’s most famous painting, The Scream by Edvard Munch. There was too much snow for me to make it up the trail that time. Four years later, a friend who frequented the spot walked me up there. If it wasn’t for her it would undoubtedly have slipped my mind forever, but here at last are some modern photos of the Scream scene. 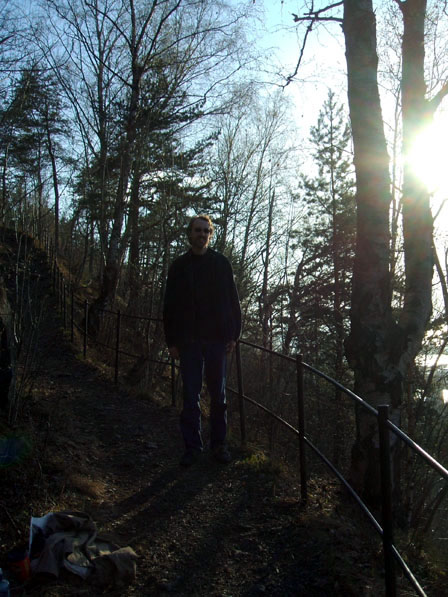 Here I am on the spot, standing around looking as normal and un-Scream like as possible. This is supposed to be the exact location but with plenty of un-1893 trees and you’ll notice the fence is nothing like the straight diagonal line in the painting. I suppose an earlier fence existed in 1893.
I am familiar with two versions of the painting, the one in Oslo’s National Gallery and the one at the Munch Museum, also in Oslo. In the National Gallery version (above), you can see a tower in the blue area on the right hand side of the picture. This is the tower of the madhouse where Munch used to visit his incarcerated sister. That building still stands beneath Ekeberg but the human figure in the painting would have to be much lower down the path for the tower to appear behind him at that angle, and I think the hill would have blocked the view of the fjord. For this scene to include both the fjord and the tower, I believe artistic license has been used; this is expressionism after all.
In the Munch Museum version of the painting, there is no tower. In the same relative position, there is merely an area of darkness. 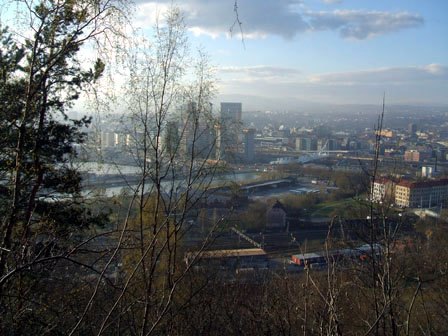 This is the view from the spot today. As you can see, there’s been much building and growth of vegetation in the intervening century. The madhouse cannot be seen here: it is further to the right and I found it too difficult to photograph through foliage.
Much further up, at the top of the hill, one gets the best view of the fjord: 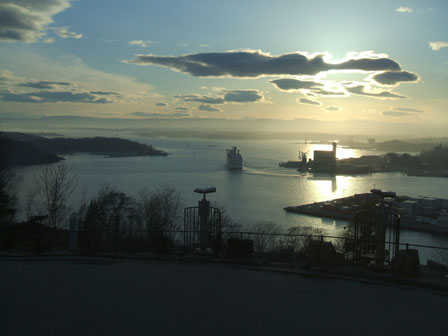 I’ll leave the final words to Edvard Munch:
I was walking along a path with two friends–the sun was setting–suddenly the sky turned blood red–I paused, feeling exhausted, and leaned on the fence–there was blood and tongues of fire above the blue-black fjord and the city–my friends walked on, and I stood there trembling with anxiety–and I sensed an infinite scream passing through nature.

Contact him here.
previous article
All Places, Infinite Time
next article
Talking with the Center of the Universe about Poetry