The booze. The hangover. The horror. 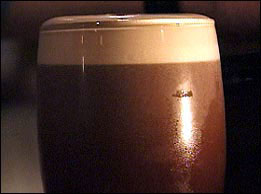 I quit my job yesterday and in a fit of merriment went to the boozer for ‘one’ at 5.30. 4 hours later I staggered, drooling and panting out the door, up the road, into a lamppost, back down the road, up the road again, up some steps and towards my house.
There was some fumbling with keys, some more drooling and a short ignominious tumble through the front door. I then decided that it would be a great time to ring the missus and make foul, depraved suggestions at her which (as far as I can recall) then degenerated into a pitiful display with me professing my undying love and simpering and blubbing like a twat.
Anyhoo: after a night punctuated with the hourly spectacle of me sitting upright and screaming at the dark before keeling over again, this morning rolls around and finds me, bollock naked, lying on my floor on a makeshift bed of sofa cushions and sweating like a pigs arse in a sauna. It took roughly twenty minutes to prise my face off the drool encrusted pillow below me and make my way to the bathroom. What followed was fairly unpleasant stuff.
My only hope is that my landlord (who lives below me) was not disturbed by the cacophany of hacking, coughing, wretching, heaving, and moaning that I was doing. I’m moving out in a month and want my deposit back. I was fairly confident that he wouldn’t be too upset if he had heard me. And then the farting started.
Now, you know that old phrase: “you’re in serious trouble if you don’t like the smell of your own”? Well, I’m in serious trouble. This morning saw the release of an odour so noxious, so vile, so utterly without scientific precedent and so downright rank, that I was beginning to fear that UN weapons inspectors were about to kick my front door in demanding to know where Saddam was.
It was hideous. A stomach churning, green fug that could curdle milk at ten paces. This, of course, produced another bout of great hacking and coughing, sweating and heaving. Which in turn, produced more farting. And so on.
So. Here I sit at my desk. Sweaty, red-eyed, with a mouth like an ashtray and an ringpiece like Satans’ breath, moaning and wheezing. I can’t do it no more. I just can’t.

Damien DeBarra was born in the late 20th century and grew up in Dublin, Ireland. He now lives in London, England where he shares a house with four laptops, three bikes and a large collection of chairs.
previous article
Big Brother, solitary confinement and choking the chicken
next article
Daftest site of the week