Fear and Loathing in Leinster House: Letters from the Campaign Trail, Day 3 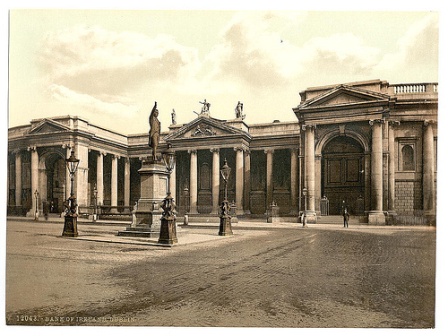 Dear Conor,
Many thanks for your letter of last week. The election seems to be going right down to the wire, yet, as promised, I shall endeavour to reply to all correspondence from concerned citizens such as yourself.
That said, I fear that you may find yourself disappointed with many of my replies to your letter. I simply fear that were I to ‘conscript myself’ to you and your organisations’ requests and agenda, that Ireland may find itself in a situation even more precarious than the one that faces it now. I politely suggest that turning the country into a ‘heavily-guarded fortress, manned by a large, independent miltia armed to the teeth with guns, guns and more guns, ever at the ready to fend off the invading Albionites’ may be a step too far for myself and the members of my party.

Your comments around the actions of the ‘nefarious Goldman Sacks’ are interesting and do merit further discussion, but I suspect that it is too early, and too volatile a situation in the country, to ‘entirely abolish printed currency’ and return to a pre-industrial barter system. I fear that such a sweeping move might further imperil the country’s economy. Not to mention making us an even larger international laughing stock than we currently are.
Furthermore, I do have to express serious reservations about your proposed five-point plan (they’re all the rage aren’t they?) for saving the nation. The erection of a vast, electrified barb-wire fence across the border with the North would be problematic, not just from a point of practicality but also from a point of sustainability. From where, may I ask, do you expect the electricity to come from? You propose the ‘tactical bombing’ of all wind farms and yet expect the energy for your plans to be made available? Seriously man, come on now.
Similarly, the ‘immediate suspension of the High Court’ and your proposed ‘public flogging of criminals’ may present difficulties with regards to Ireland’s observations of European Human Rights law. The ‘establishment of local militias’ in the 26 counties would usurp the role of the standing army and your demand that the speaking of the English language be banned on pain of public waterboarding is, I must say, simply bananas.
Your suggestion of the provision of ‘free Jaffa Cakes for all those over 65 years of age’ is a laudable idea, but entirely impractical.
Finally, I feel a responsibility to take you to task regarding the claims you make on page 17 of your letter. Specifically, your assertion that the ‘national wealth was melted down into a stash of coins stored underneath the Leinster House car park which is being kept there until the departing FF/Greens can stuff it into a rocket to be launched from the roof of the Natural History Museum, bound for Argentina’ strikes me as the ramblings of a mind in need of serious psychiatric intervention.
I urge you to seek professional help.
I trust this letter finds you well and would be most grateful if you could find your way to giving me your No. 1 on Election Day.
Is mise le meas,
A O’Candidate
Image from the Flickr Commons, used under a CC licence
Previously
Fear and Loathing in Leinster House: Letters from the Campaign Trail, Day 1