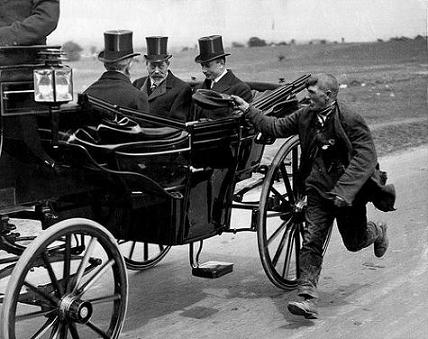 [Dublin] Government sources have revealed that a cabinet decision reached late last night, will result in the cancellation of this years St. Patrick’s Day celebrations in Ireland. Blather.net understands that all parades, parties and festivities will be banned, and anyone found in breach will be liable to substantial fines, custodial sentences and/or deportation. The new Irish Taoiseach (Prime Minister) Enda Kenny, is expected to make the controversial announcement within the next 24 hours; thought to be directly related to Ireland’s ongoing financial crisis.

Incoming Minister of Manipulation & Keeping Up Appearances, Fergus O’Flatulence, speaking to reporters early this morning, confirmed the shock move and sought to clarify the governments motivation. “Listen here to me now, lads, its a decision we didn’t take lightly, but in the current economic climate, its one that had to be made. We can’t be seen to be frivolously wasting taxpayers money, you know. Policing, traffic diversions, street closures, it all adds up”.
“Having said that, we’re primarily concerned of the optics of the whole shebang. Can you imagine the reaction in the German Bundesbank if they turn on the internet and see footage of scantily clad Irish harridans river-dancing down Dame Street, with giant potato heads and paper mache snakes behind them, being cheered on by a baying rabble of onlookers, puking into the gutters, pissing in their pint glasses and going skinny dipping in the River Liffey come 3pm?. We’re supposed to be skint, for fecks sake!”
“The eyes of the world will be upon us, and we as a government, have a real opportunity of making a significant impact on our economic reputation abroad. To further this, we will shortly be issuing instructions to patriotic citizens about what they can do to help”. While he would go no further ‘on the record’, blather.net understands that such measures include the following:

The Irish Prime Minister, who will be making the annual St. Patrick’s Day pilgrimage to the White House in Washington, is also expected to play a large part in the March 17th proceedings. Instead of the traditional gift of a bowel of shamrocks, it is now expected that he will present President Obama with what government sources are describing as a ‘Brocaire Box’.
“Its very much like the typical cardboard Trocaire, or UNICEF Box with a slit at the top for money to be collected”, said Minister O’Flatuence, “but we’ve changed the logo obviously. We’ve also put pictures of hungry lookin’ Irish babies on the front. You can’t buy that sort of coverage, you know. We’re bringing 30 million of these with us for distribution to Irish-American groups, along with another 10 million copies of Angela’s Ashes”.
More as we get it.
Image from Flickr Commons, used under a CC Licence