Up until now I’ve been writing about my experiences in the city of Oslo, capital of Norway. But Norway’s previous capital was the west coast city of Bergen, a far more dramatic place, which I have just visited.
Oslo and Bergen are not near each other. I think the train distance is about 470k and we took the roads. I went with the summer school who organized a bus tour for about 65 of us. We stopped overnight at LÃ¦rdal and then arrived in Bergen the following evening.
Bergen is famous for its constant rain, but while there I experienced everything from downpour to beautiful sunshine. I was told this was atypical, even for July. So expect rain if you go there. I’m sure this is something that may put you off the place at first, but once you get beyond that there is so much to discover. Bergen has a character and feeling I can barely describe. The streets display architecture from all sorts of historical epochs, all jumbled together chaotically. The small city is on an incline, moving upward from fjord water to the high, misty forest that overlooks all.

My group was given a particularly priveleged introduction to Bergen. I felt that we were given the opportunity to perceive more deeply than ordinary tourists. We were given hours of historical and architectural sightseeing, guided not by a regular tour guide but by art historian Professor Per Jonas Nordhagen, who despite his great age walked quickly and orated loudly. We were also talked and walked through the Rasmus Meyer collection and the city’s art museum by Chip Sheffield, an American academic and an authority on Norwegian art. And when we visited the home of composer Edvard Grieg, it had been specially arranged for pianist Natalia Baudoin to perform a concert for us. From talking with these people, my ideas about Norway and Norwegian art and music were considerably widened, and I will have much to write about these subjects in future.
My journey to and from Bergen introduced me properly to the vast and majestic landscape of Norway. This is also something I will return to in writing.
Here’s a few pictures from the trip: a view of Bergen taken after our ride up on the funicular (“FlÃ¸ibanen”); the old buildings of Bergen’s Bryggen area, on the waterfront (the little man in the photo above comes from there); and finally, a rainbow at VÃ¸ringsfossen waterfall, which I photographed while eating lunch on our journey home. 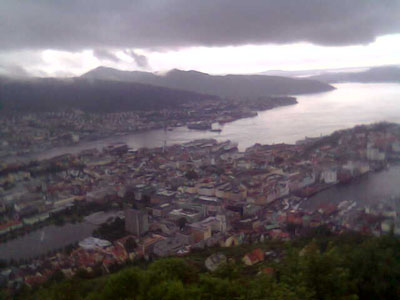 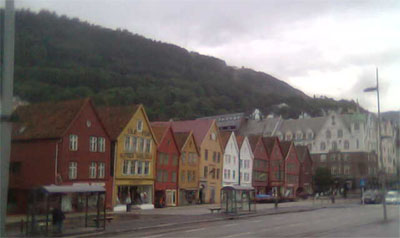