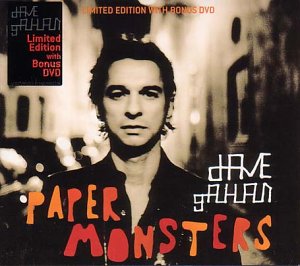 The Depeche Mode frontman finally makes good on his threats to deliver a solo album. Co-written with Knox Chandler and produced by Ken Thomas, the album doesn?t quite manage to escape the ghosts of the Depeche Mode sound. In fact, the influence is everywhere. That said this isn?t a knock-off or a spin off. It is a fully-fledged, well-realised solo project that Gahan has quite clearly poured his heart into.

The results are mixed, varying between the sublimely beautiful (Stay), the thumping whisky-priest roar of old (Bottle living) and the occasional outright miss (A little piece). The highlight of the album is the track Hidden Houses which sees Gahan finally let rip with his voice, echoing and bouncing over a thumping great bassline and guitar hook.

Overall, this is well worth looking into and a valuable addition to the collection of any Depeche Mode starved fans: the sound of a man finding his musical feet and, in moments, getting it just right. We can now eagerly anticipate Gahan?s next output, whether that be alone, or as we are told, back in the DM fold.

Damien DeBarra was born in the late 20th century and grew up in Dublin, Ireland. He now lives in London, England where he shares a house with four laptops, three bikes and a large collection of chairs.
previous article
Queen Nefertiti found
next article
The 23 enigma: Captain Clark welcomes you aboard!