“Who’d have thought an atomic bomb could do so much damage?” – Father Ted 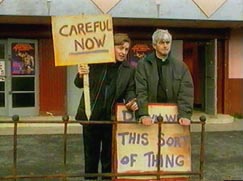 At long-fucking-last… the British government has finally agreed that Sellafield – the plutonium reprocessing plant on the Cumbrian coast – may in fact be a health hazard.
Melanie Johnson, the UK Public Health Minister, stated in the House of Commons that the results of tests on more than 3,000 extracted teeth by health authorities, showed that the level of plutonium increased the closer one lived to the plant. Eureka!
But no… Ms. Johnson has also said that ‘the average concentrations of plutonium were so low they are considered to present an insignificant radiological hazard’.
Even more charming is a statement by BNFL (British Nuclear Fuels): ‘What is not clear is whether the plutonium recorded in this study originated [from Sellafield] or from nuclear weapons testing fall-out.’ (The Guardian >>)
The tests were carried out on teeth extracted from as far away as Scotland and Northern Ireland. In the republic, outbreaks of leukemia
More in the Irish Independent >>
The Guardian: Plutonium from Sellafield in all children’s teeth >>
Sellafield source of contamination in children’s teeth, UK admits >>
Cumbrians Opposed to a Radioactive Environment >>
Greenpeace >>
Offical Sellafield site >> (careful now!)
Irish Green Party >>
Shut Sellafield campaign >>
‘Sellafield is now more dangerous than ever. If it is hit by terrorist attack, or if an accident occurs, Dublin, Dundalk and Belfast will be uninhabitable. Depending on which way the wind is blowing, England, Scotland and Wales will also be badly affected. Like Belarus, which received 70% of the fallout from Chernobyl, Ireland did not ask for this nuclear power base to be built beside us. It?s up to us all to try to shut Sellafield down.’
More >>
Carlingford and Dundalk: Higher rate of incidences of cancer and Leukemia, thanks to Sellafield >>

Chief Bottle Washer at Blather
Writer, photographer, environmental campaigner and "known troublemaker" Dave Walsh is the founder of Blather.net, described both as "possibly the most arrogant and depraved website to be found either side of the majestic Shannon River", and "the nicest website circulating in Ireland". Half Irishman, half-bicycle. He lives in southern Irish city of Barcelona.
previous article
TSOG: The Thing That Ate the Constitution
next article
A Message in a bottle for Dow