More about the Norwegian music scene.
A Norwegian journalist once told me that “the extremes of music thrive in Norway.” Now, I don’t know whether this is because of the psychology of the culture – a small population, with a kind of introverted nature, living in a uniquely dramatic landscape – but hunched over their instruments as they are, Supersilent is a band that plays at the extremes.
“The ear cries out for melody and rhythm the way the eye cries out for the figurative in painting,” a friend said to me at the end of a long Supersilent concert in Oslo’s basement-like John Dee venue this week. He meant that Supersilent try to leave the “figurative” behind.

This is explained by the different musical traditions of which Supersilent is an unprecedented mixture. These are: the free jazz tradition set in motion by Ornette Coleman (Supersilent’s music is wholly improvised); electronic music typified by artists like Autechre (who based their music around avoiding the “tension and release” of rock music); and the tradition of those who experiment in noise and ambient sound. And while Supersilent can be noisy, they also have the ability to completely hold back, playing only sweet sounds with synth, trumpet or just a lone voice, singing sounds without words. It’s the abstractness that’s important, not whether it is manifested in a pleasant or harsh way. After all, “supersilent” could mean both “very silent” and “above silent”.
There are four in the band: Arve Henriksen (trumpet, voice and occasional drum-abuse), StÃ¥le StorlÃ¸kken (synth), Jarle Vespestad (actual drumming) and Deathprod (various mysterious electronic devices). It’s very hard to describe their sound – “free jazz with synthesizers” doesn’t quite encapsulate it. There are tremendous build-ups of sound, and then there are quiet depopulated atmospheres.
The triple-album Supersilent 1-3 (1998) is a three-disc set with a very raw, live sound. The first piece on the first CD is 29 minutes long and goes like this. Cymbals and drums are played like voodoo priests would do if they’d discovered satire. After a couple of minutes, there’s the first hint of electronics. Blurps and squeaks and incomprehensible vocal samples come through. After about 9 minutes, this gives way to interference and cavernous sci-fi clanks. Then silence. Then click, clack, click, then squeaks, then growing distortion and an imaginary phone ringing on and on and on, and the drums are back, and random keyboard notes. White noise comes in over the horizon and goes away again. In the final 7 minutes there’s a drum groove that keeps stopping and changing direction and suddenly it finally stops. Does that give you some kind of an idea? The highlight of this collection is disc 2 number 5 (“2.5” – Supersilent don’t have song titles), but you’d lose patience with me entirely if you had to read my fantasies of “spaceship fuel drums” and “a chorous of mechanical crickets.”
Subsequent albums have a smoother recorded sound, and while 1-3 was full of the joy that comes with creating a blanket of noise, Supersilent 4 (1998) is a noirish record, beginning with a mournful trumpet that gives way to a foreboding drumroll. Things get more sinister on “4.2”, with a pulsating beat, a moody organ and a whispering voice. The album does get noisy, and “4.3” is reminiscent of drum’n’bass, for example.
Supersilent 5 (2001) opens with the prettiest of jazz piano chords, and Arve Henriksen’s ethereal singing. But when the trumpet comes in, the music meanders into some of that dark mood heard on the previous album. But much of this record is barely more than ambient, and “5.5” in particular is like the ghost of a song, with almost nothing happening at all, restrained yet warm.
Supersilent 6 (2003) is the most accessible album, with the most fully realized improvisations. Everything seems to happen at just the right moment. The instrumentation is very well balanced. The synths especially have an impressionist, dreamlike quality. The album ends with a film soundtrack-like wash of synths, twinkling piano-like sounds, angelic singing, whistling, and some kind of psaltery instrument.
I have always heard Supersilent’s live shows raved about, and I finally got to experience one this week. I thought it took the band about 45 minutes to really warm up, though. At first, I felt I was hearing no development from what is on the albums; I wanted to hear them improvise something new. I got what I wanted when some kind of tape delay sound, like a My Bloody Valentine guitar sound, was looped, joining Arve’s high-pitched and reverberated wailing, and then Deathprod started playing some kind of electronic version of a lap steel guitar. They followed this piece with something ultra-aggressive, with Arve screaming into a vocoder like a toy robot in love with the wrong kind of heavy rock, and Deathprod moved around some kind of theremin thing clasped in his fist. Then everything went faster than light for a –
Supersilent’s albums are released on (and can be bought from) Rune Grammofon. 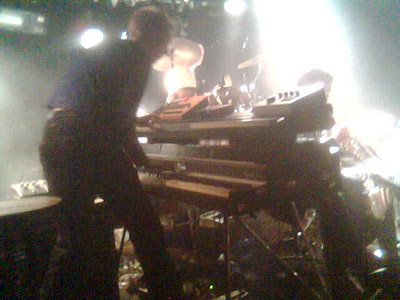 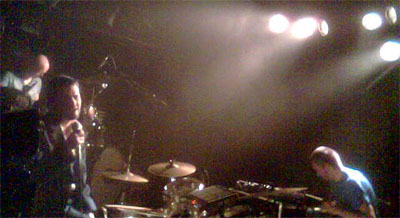