When Will There Be a Requiem for Radioactive Toothbrushes?

This is Torbjorn Davidsen: artist, actor, protestor, Nordmann, but most of all a father. On the day that the International Atomic Energy Agency (IAEA) and its director Dr Mohamed ElBaradei were awarded the 2005 Nobel Peace Prize, he made a strong individual protest, by carrying a gravestone 20 kilometres on his back, to put on the lawn of the Nobel Institute.

The IAEA have actively promoted the directive Euratom 96/29, an agreement between all EU countries (except the UK) to allow radioactive waste to be used in consumer products. Norway is not in the EU, and could outlaw the importation of, or trade in, any such products, but only if that does not go against any prior international agreements. As Norway has the European Economic Area (EEA) agreement with the EU, it does not look as if she could keep these products out. Under the directive, it is permitted to mix radioactive waste into all consumer goods apart from food, children’s toys, jewellery and cosmetics. But Torbjorn is disturbed that radioactive waste could still go into the manufacture of his daughter Vilde’s toothbrush, bicycle or glasses. He wishes to see this directive dead, and is prepared to do what he can to bury it. 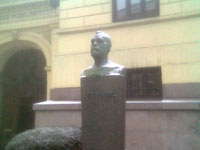 It was a cold December morning, outside the Nobel Institute on Drammensveien in Oslo, and snow was attaching itself to Alfred Nobel outside its doors. Torbjorn’s 20k trek with the gravestone, from Nesodden by street and by ferry, came to an end here, on the Institute’s lawn. 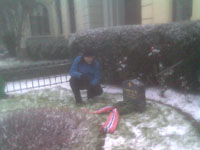 His physical feat completed, Torbjorn put the heavy gravestone on the grass and laid a wreath, with a Norwegian flag. A candle was also placed there. 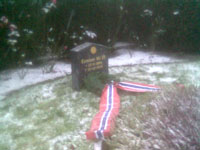 The gravestone, which almost looks like it belongs here in this otherwise unoccupied space, tells us that Euratom 96/29 was born on 13 May 1996, and died on 10 December 2005 (today). 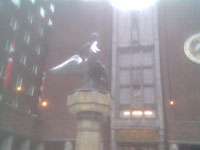 Torbjorn left the gravestone to an uncertain fate (what will the authorities do with it?), and walked over to Oslo City Hall, where he knew Dr ElBaradei would be receiving the Peace Prize at 1pm. Outside, the police band were tuning up their brass instruments. 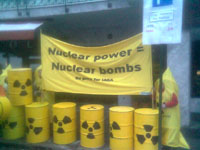 Greenpeace campaigners, in yellow and black ‘nuke’ costumes, stood opposite City Hall, protesting the awarding of the prize because they are resolutely anti-nuclear. “Nuclear power = nuclear bombs” is their slogan. If you are interested, you can read their press release on this protest (in Norwegian) and their document Extended Greenpeace statement on the award of the Nobel Peace Prize to Dr Mohamed ElBaradei and the International Atomic Energy Agency (in English) for their views. 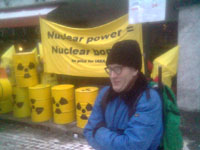 Torbjorn greeted the Greenpeace protestors, and here you can see his world meet theirs. We all stood in the cold, waiting for VIPs to arrive in limousines. 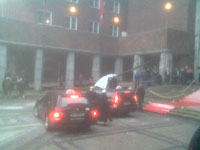 In the end, two very ordinary Oslo taxis pulled up, and Dr ElBaradei and his colleagues stepped out. I was too far away to get a photo of him, but Torbjorn’s own video-cameraman was positioned close to the red carpet. Today’s footage will be used for a film about Euratom 96/29; previous to today’s event, Torbjorn interviewed Dr Chris Busby on film about this issue. Dr Busby is a British scientist who has been campaigning against Euratom 96/29.
This footage can be seen online, linked to Torbjorn Davidsen’s press release.
I stood around and observed Torbjorn observe later proceedings. Unremarkable-looking dignitaries flowed into City Hall, the Swedish ambassador’s car glided towards us in the falling snow, and the band played “The Winner Takes It All”.