This painting, Spill og dans (Play and Dance), depicting a fiddler and a dancer, hangs in the same room in Oslo’s National Gallery as masterpieces by Degas, Picasso, Cézanne, Van Gogh, Gaugin and Courbet, as well as six of the most important works of Edvard Munch. So whose painting is this, to be given such major prominence?
It was painted by Halfdan Egedius, a Norwegian who died before his twenty-second birthday. He was born Halfdan Johnsen in 1877, but later gave himself the name Egedius, because let’s face it, that’s a much cooler name than Johnsen.

Egedius’ interest in painting and illustration began at the age of 5, and he attended art school from the age of 9. From the age of 15 he began painting the landscape of Telemark, and he became fairly successful at this. Teenage works by Egedius can be seen in major galleries. He illustrated books of Norwegian sagas alongside luminaries like Krohg and Werenskiold. His rise as a quality artist was so rapid that academics have wondered if he would have become as important as Munch had he lived. What would a lifetime of artistic development have brought?
Egedius would often chew on a bit of straw when out in the fields of Telemark. Unfortunately, he contracted a bacteria from this, and he died from actinomycosis in 1899.
A loss to the world, but we still have paintings like this one. 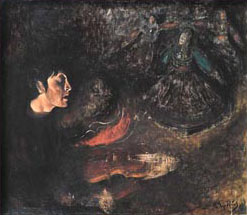 Contact him here.
previous article
Krohg
next article
When Will There Be a Requiem for Radioactive Toothbrushes?