What you are looking at is the “before” shot. The hair is wet, so you can’t see the full extent of the stack of rock ‘n’ roll hair I had. My hair had been growing since January. It was approaching the dreaded ponytail length, and I didn’t want to end up that way. Besides, it was thirty degrees in Oslo, i.e. hot. I had been looking for a haircut free-of-charge, for some time, but had not found anyone to do it, here or during my trip to Ireland.

But then I encountered this man! Let’s call him Tore X. Known to me already, he asked me how my holiday in Ireland went. I replied that I had not found the free barber I was looking for. He instantly offered to cut my hair, which he did – on the street! – the following afternoon. I arrived on the scene in a poloneck/turtleneck and brought a comb. He had some scissors. He said they were “ok” scissors. I feared how would it look. I mean, look at his own hair! He actually said he “didn’t care” what he looked like!
He laughed to himself as he hacked away at my head. “The tricky thing is to make it the same on both sides,” he chuckled.
“Um, you went to art school, didn’t you?” I asked. “You did some sculpture?”
“Yes but symmetry is not regarded as important in modern art,” was his discouraging response. 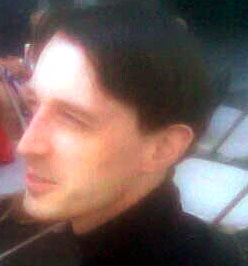 Here is the “after” shot. You can’t see both sides here but I’ve looked in a mirror and can verify it is fairly even. Tore X has some concept of symmetry after all. But what do I look like, really? An arrogant pop star? A Frenchman? Juliette Binoche?
My old hair was swept away with the cigarette butts that were strewn about the chaotic street.

My previous haircut was equally a Haircut of Fear. It was also cut for free, on a hungover new year’s day in Ireland, by ladies in masks. A story best told by this photograph: