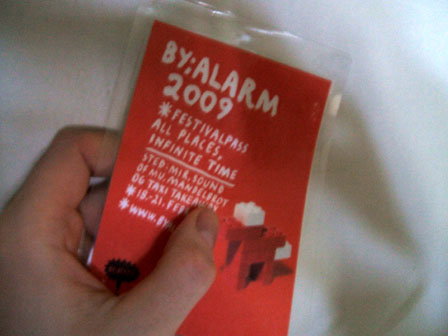 Hi – I have a personal message for North readers at the end of this blog entry. But first read about my latest exploits:
This year at the non-corporate Oslo music festival By;Alarm (which occurs at exactly the same time as the more commercial music festival By:Larm), Dacianos played at Mir, but the band was reduced to… well, just me.
‘The rest of the band are in jail,’ I announced at the start of the show. I had seen some guy on stage say this years ago, can’t remember who, but it’s a good way to start.

I played ‘Polyxo’s Ghosts’ at the piano keyboard, then I introduced the small keyboard from 1989 on which I played ‘Ridiculous!’ I introduced the song by dedicating it to anyone whose psychiatrist has psychiatric problems. That didn’t seem to get a reaction so I said ‘Judging by your reaction, it’s the wrong audience’.
I had to stand up then to explain what I was going to do with the microcassette recorder that was held together with gaffa tape. As people seemed to be amused at what I was saying, it made it easier to go on a bit about the recordings of me reading texts, which would be playing behind two songs.
I got down on the floor, played the harmonium and sang the song ‘Lighthouse Beam’ over a text about Wandsworth Park. Then, when the spoken word switched to an excerpt from a novel I finished writing ten years ago (What the Ostrich Sees in the Sand, the part where Frances goes to the art exhibition), I stood up, switched to guitar and sang ‘The Ebbing Tide’. That microcassette recording was also interspersed with me in bed singing some notes that I dreamt, and a bit of guitar too. I started playing the same guitar as on the microcassette, playing it over the final bit of text.
‘Now for something unusual,’ I announced, as if everything up to that point hadn’t been. I introduced my guest singer Trond Arne Vangen, turned on the 80s keyboard backing track, and away we went with the fairly weird pop song ‘Sabina’, now with an added ‘piano section’. That was the grand finale.
Later a guy from one of the other bands said my show was ‘inspiring’. Trond Arne’s analysis was that I ‘took risks all the time’. The next day another friend of mine confused listeners when she described my show as ‘experimental’, i.e. instead of ‘pop music’. Maybe it was both…?
By;Alarm 2009 was a lot of work! We hosted a lot of bands and DJs at Sound of Mu over the three days and nights, and I also spent my time at the other stages (Mir and Mandelbrot) to see various friends’ bands. One specific joy for me was seeing Masselys at Mandelbrot, because they played a couple of things I co-wrote with them in Berlin, so it was good to see people dancing to that particular music.
Personal message: I need to take a break from blogging for a little while, so North will now be going on hiatus. I need more time these days for other things that feel urgent. Firstly, I’m taking an exam in Norwegian alcohol laws (!). Secondly, I have a Dacianos album to finish. It’s got everything from lush chamber music to 80s keyboard disasters on it and it will be just great. Thirdly and most importantly, I have been plagued by the unfinished novel I’ve been working on since 1 September 2004 (after all this time I have crawled to page 167). It proceeds very slowly, but I’ve been writing it so carefully that it won’t need multiple drafts. At this stage, I don’t want to be writing anything else, so North needs to take a rest until my abilities can be diverted this way again. When North returns, I’ll announce it on the Dacianos mailing list and elsewhere. Meanwhile, check out the main Blather.net site (I hope you realized North is part of a gratuitously famous and hideously successful group of blogs). On the Globaleyes blog, there’s this thing called ‘The Game‘ running at the moment, and in the main Blather blog, there’s an interesting entry from a Frenchwoman living in Dublin. Also on the Zeitgeist blog, you can keep up to date with all the non-mainstream news stories that we try to highlight. Sometimes we get it wrong and highlight news that isn’t ignored by the mainstream media (really sorry about that)… There’s also a blog called Shitegeist, a kind of satire of the Zeitgeist. Or is it…?
Sounds complicated? Blather.net is just that kind of institution, so please waste your complicated and idle hours there.