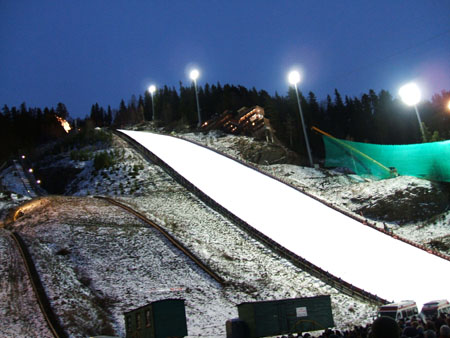 Vikersund is a small place in the countryside that hosts one of the biggest ski-jumps in the world. Holmenkollen is a stunted dwarf compared to this jump, which has had a record of 219m achieved on it …so far. I went to Viksersund to attend a ski-jumping (ski-flying to be exact) event, a world cup event, apparently, and I was wondering if the record would be beaten. So I stood with Norwegians in the freezing snow, and many of them were all dressed flags painted on their faces etc.

Not that the heated, sawdust-strewn drinking tents were unpopulated. Long wooden benches were full of beer-drinking celebrants. This was a big day for Vikersund’s locals. The world cup hadn’t come this way since 1998. There were ski jumpers from everywhere from Finland to South Korea, but this bar was populated only by hardy Norwegians. It seemed to me I was the only foreigner there, and felt like a spy.
Ski-flying works like this: champion skiiers fly off the jump into the sky and reach the bottom of the hill by flying in a well-balanced way through the air and landing safely on the ground below. If they were not champions, they would plunge to messy white deaths. The furthest one jumps the more points one gets, but one can not win by this alone. The jury can add or deduct points depending on ‘style’ (i.e. the way the skiier balances in the air).
I think sometime in the distant past when I had a television (when I could afford a television, no, when I could afford to watch someone else’s television) I think I saw some slow-motion skiiers in the middle of the screen making a v-shape with their skis as they floated through the sky. I am fairly sure I changed the channel whenever I saw something like that. But being in Vikersund was so much better than television because I could comprehend what was going on. Yes, it is nice to see people gracefully flying through the air but it is only up close like this that one can see how big the jump actually is, and how astounding it is to see someone land on the 207m red line.
I got to see many jumps. First, all the jumpers tested the hill, so that the officials could set the right speed for the competition (everyone is supposed to gather up the same speed on the jump). Then finally there came the real thing, sometime after sunset. The expected atmosphere of anticipation came etc. A bell sounded. Disconcertingly, it was exactly the same sound as a suburban doorbell. The skiier took off from the jump. A thundering sound was heard from the speakers, like a lighning bolt wielded by Thor. Hmm. Was that a recorded sound effect, or was it the sound of the ski scraping off the end of the jump, enhanced by microphones?
Anyway, after about 10 guys jumped some red arrows appeared on the big screen and it seemed that the wind had changed too much for the competition to be fair. So the speed was changed, the competition continued, but after the last jumper (no.42) the first lot had to jump again.
That was the first round, and the top 30 got to jump in the final. The weakest jumper of the first round went first, and the best went last. This gave the event some kind of dramatic build-up. There were loud cheers when it was the turn of the most popular Norwegian jumper, Anders Jacoppsen. I hope I have that name right, it’s so hard to remember, being so typical. Why can’t they call him ‘The Plumber’? That’s what he used to do for a living, until relatively recently, I’m told. The Plumber is a good name. Why can’t skiiers have names like wrestlers? You’d never forget them then. Anyway, the Plumber jumped 208m. Then some other guy jumped but didn’t do so well, so the Norwegian won. Loud cheers! A great day for the Plumber. Mass crush to get into the drinking tents.
Ah yes, my friends and I were not staying for the folkefest. It would have been good if we’d had the money. The beer was actually served in pints, not half-litres. This was a big night for Vikersund. I was assured that it would have all the charm of a hillbilly festival, with a covers band bashing out not-forgotten tunes, men in drunken mobs bonding with one another (two dishevelled vikings were already shouting the lyrics to the ‘song’ Paradise City at each other) and young girls would be showing off, because life is short and you’re 75 before you know it.
Instead we experienced a busride home with drunk Oslonians, treated all the while to the unending sound of humanity (not unlike, as it happens, the stench of humanity).
Update: I am told the Plumber’s name is Jacobsen not Jacoppsen, although I’m sure I saw a banner with the latter spelling at the event. Maybe it was Jakoppsen, ‘kopp’ being Norwegian for ‘cup’, but if that’s a joke I don’t get it.

Contact him here.
previous article
Not The Last Oslo Nightlife Anecdotes By A Long Shot
next article
Årets Norgesvenn