Sorry I have not been writing recently. I’ve had too much work-stress, illness and even a tinge of Nesodden syndrome with which to deal. Why all the stress? Surely the result of becoming allegedly more important and significant in the land known as Norway! So important in fact that I have just won an award for my vague efforts: Årets Norgesvenn, “the year’s norgesvenn” for 2006. This, according to the suave radio presenter who handed me the award at Indigo last night, is for my services to Oslo’s underground music scene with my work at Sound of Mu and with my musical project Dacianos.

What’s that I hear you say? “What’s this all about and aren’t they insane to be giving the likes of you an award?” Well, it was part of the prestigious By Alarm (“city alarm”) awards. They reward underground activities like “best CD-R release”. It is organized by the indefatigable Metronomicon Audio collective, as an alternative to the music industry’s hip and trendy By Larm (“city noise”) awards. And why is an alarm better than a noise? Well, mainly because it’s better to alarm a city than to make some kind of hip and trendy noise in it. Hence, most of the awards at By Alarm came in the form of menacing-looking bricks. Very alarming. I wonder what the prizewinners are doing with their bricks today? I, however, received a traditional Norwegian Lusekofte (i.e. jumper, sweater, pullover, that kind of thing) as my prize. In these pictures you can see me try it on, live on radio!
As usual, you readers are welcome to contact me with your thoughts and opinions, but to help me filter out non-entities, please state first which awards YOU have won before bothering me with your mad ramblings. 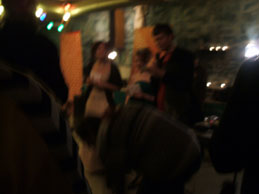