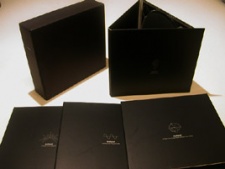 For those of you who still think of Norway as a cultural and musical backwater with nothing to offer, I’m going to devote some blogspace to good Norwegian music, what it is and why it’s good. To some extent Norway does conform to the eurotrash stereotype (cliché-ridden rock, or inane pop) but there’s no need to give in to Anglo-American cultural imperialism: the most interesting original music in the world today is being made here in Norway. We’re 7 years into its best ever musical decade, and I’m going to write about some of the highlights, in all sorts of genres (indie/alternative, folk, jazz etc.).

Deathprod Imaginary Songs from Tristan da Cunha (1996, reissued as part of Rune Grammofon’s Deathprod box set, 2004). This emerged from Helge Sten’s academic studies in sound art. Generally speaking, his music is based on the electronic manipulation of the sound of played instruments (mostly violin). In this case, the finished musical piece was transferred onto wax cylinders, the oldest medium for sound recordings. The wax cylinders were then played back into digital equipment, resulting in a CD with layers of ancient-sounding hiss. He imagines these pieces as coming from Tristan da Cunha in the South Atlantic, one of the remotest human settlements in the world. The album sounds suitably… alien… enough to have come from distant, inaccessible islands, and you really should hear it. I don’t know what the 269 inhabitants of Tristan da Cunha would make of it though.

Portrait of David These days are hard to ignore (Racing Junior, 2001). This is the solo project of The White Birch‘s Ola Fløttum. Someone told me that he was inspired by Smog, and I suppose this music is similar in its stark simplicity, but if you compare it to even Smog’s best work (Red Apple Falls) this quiet Norwegian album is by far its superior. The vocals emphasize singing more than hitting you with lyrics (Fløttum sings in a dreamlike, high vocal register), and this album has a different emotional effect to that of most indie records. The simple, repetitive musical notes sit on top of an atmospheric soundscape of otherworldly drones and echoes. Perhaps the fact that it was mixed by Helge Sten (Deathprod) helped create this beautiful mood.
Other acts I’ve written about:
Nils Økland
Salvatore
Supersilent
Susanna and the Magical Orchestra