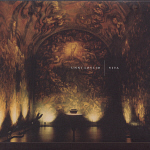 It was a rainy Sunday evening in may. A friend and I took the train deep into the Oslo suburbs (well, Slemdal) to hear folk singer Unni Løvlid sing at Emanuel Vigeland’s mausoleum.

I’ve written about the mausoleum, Tomba Emmanuelle, in an earlier entry of this blog. It is where the ashes of Emanuel Vigeland are kept, in a huge room the walls and ceiling of which are covered by frescoes he spent over twenty years painting. The reverberation in the room is impressive: every sound seems to last about ten seconds. Tonight about 24 people gathered to hear a solo vocal performance by Unni. We were given blankets with which to keep warm.
This being a very spiritual place, Unni sang very old religous songs, the kind you don’t hear very often, perhaps because of their unusual tonality. The notes that she chose to sing louder remained hovering in the air long after she sung them, like a backing vocal. At other times she sang extremely quietly, creating gentle musical echoes.
Her album Vita (2005) is a collection of such songs recorded here. The picture above is the record sleeve, which depicts the room. I believe my sister referenced the music as “ancestral singing” in her poem, but you’d have to ask her.
Unni Løvlid website
Unni’s myspace (where you can hear a song from Vita)
Emanuel Vigeland website

Contact him here.
previous article
I Was A Chinese Free Improviser (again)
next article
Grünerløkka vs. the Chain Stores (part 3)