I Was A Chinese Free Improviser (again) 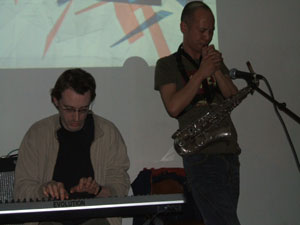 Well, this time there was only one Chinese musician: Li Tie Qiao. The other two were Norwegians, Kai Mikalsen and Bjarne Larsen. The four of us performed together this week. The music was nothing like the noise of the last time.

There was a certain amount of ambient noise soundscaping going on with contact mics and effects boxes, but with my two keyboards and Bjarne’s guitar there was a certain amount of melody too. The noisiest thing I used was a dictaphone recording of me reading from What the Ostrich Sees in the Sand.
One audience member, who was interested in us doing a soundtrack for his animated film, said the music we created was “exactly a middle ground between ‘industrial sounds’ and theme music more akin to Lalo Schifrin (enter the dragon)”. A young guy asked me if I’d ever played Final Fantasy, which turned out not to be a piece by Chopin, but a computer game. An old painter dude exclaimed to us, “You play like I paint! Dangerous, but beautiful!”
Links:
North:I Was A Chinese Free Improviser
Li Tie Qiao’s myspace
Last FM: Li Tie Qiao
Kai Mikalsen
Interview with Kai
Kai’s project Kobi
Kai and Bjarne Larsen are members of Origami Arktika
Bjarne is a member of Salvatore
Bjarne is a member of Lasso
My biography and fiction writing, including What the Ostrich Sees in the Sand
I am a member of Dacianos
Dacianos’ myspace
I am a former member of Melek Taus