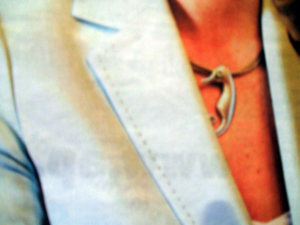 I don’t want to leave the subject of Norway’s psychic princess Märtha Louise just yet. I’d like to report on what the reaction to her opening an angel communication school has been like in Norway.

Clifford Pickover, in his book The Girl Who Gave Birth To Rabbits (about Mary Toft, the woman who faked giving birth to a litter of rabbits in 1726), didn’t see much difference between the delusions of the 18th century and our age, and he wrote, “What I have learned from Mary’s legacy is that there is increasing urgency for scientists and leaders to be vigilant in their struggle against hoaxes, especially now that the mass media make it particularly difficult to distinguish fact from fiction… Nonscientific reasoning and bizarre therapies are gaining acceptance as medical treatments… The best way of battling the spread of pseudoscience is an enlightened public, able to distinguish logic from delusion, charlatans from truth-tellers.”
Within this context, it can be seen that for some people a school that teaches people to communicate with angels is, in a sense, a threat. And on 31 Juli a writer in a financial newspaper, Trygve Hegnar, labelled Märtha as nothing more than a swindler. His view was that her school’s promises are in conflict with marketing laws.
The Princess got no support either from Christian quarters. The Christian politician Inge LÃ¸nning’s position was that the teachings of the angel school are “on a collision course with Christian belief”, as the tabloid VG put it. LÃ¸nning said to Aftenposten, “the religion… prevailing in Norway before Christianity… was a belief in one’s own power… These notions can’t combine with a Christian belief in God.”
Märtha obviously did not ignore these criticisms, and became sick, cancelling two weeks of engagements, because of all the hullabaloo surrounding the angel school.
Princess MÃ¤rtha Louise’s first official engagement since the “angel-noise” (VG again) was the Bislett Summer Games on 11 August. Amusingly, Geir Smeby of the Bislett Summer Games told Nettavisen that questions about the angel school were forbidden. “We decline to lose focus on our event to the benefit of angels. Such questions are not acceptable,” he said.
There has of course been support for the Princess. Her sister-in-law Mette-Marit, the ‘commoner’ who married the Crown Prince and became staple tabloid-fodder, declared in Dagbladet on 27 July that she “was healed by Märtha”. Yes, “when the Crown Princess Mette-Marit had a kidney infection, she was treated by her psychic sister-in-law’s warm hands.”
Then on the night of 2 August there was Irish support, in the form of middle-aged singer Sinead O’Connor, who was in Trondheim for a concert. Translated back into English from Norwegian, Sinead’s words of support were: “All have their own theories. I believe in angels, maybe they are everywhere but we can’t see them the whole time.” But O’Connor didn’t stop there, and went on to say that she has a friend who believes clouds are angels. Not stopping there either, she then revealed that she herself has met angels: “I am of the understanding that angels can take up residence in human beings, and I have myself met people who I later have understood are angels.”
What does Märtha Louise make of that?
(Also read part one, if you like.)
Postscript.

Contact him here.
previous article
The Psychic Princess
next article
Playing in Someone Else’s Band