Playing in Someone Else’s Band 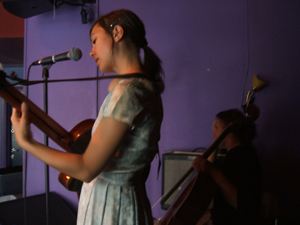 Pictured: Marie and Ida (cello) at the soundcheck at Dattera til Hagen.
Recently I’ve been playing in someone else’s band other than my own. The band is Hanny.

I like the band so I said yes to doing it. It’s good songwriting with melody, not hung up on genre, and with some songs in French, a welcome relief from Norway’s obsession with anglo-american music. But the songs are deceptively complicated to play. Unsure of my own abilities, I thought it was a bit like asking Sid Vicious to join the Beatles, but with a lot of practise I thought I got there in the end.
The first show was at Dattera til Hagen during Oslo’s Øya festival and the second was at home at Sound of Mu. I’ll also be playing with them at the Organ festival for music and art.
As in my own band, there is frequently a different line-up for each show. The first time round with Hanny, Ida the violinist was away and there was a guy playing bass. He had mysteriously vanished by the time I turned up for the practice for the second gig, but Ida had returned. It was when she came into the room that I realized that the band consisted entirely of brunettes. Not just the four girls: I am too. This became a topic of conversation for several days. I thought it must have some kind of unusual power in blonde Scandinavia. Apparently no member of the band is more than 50% Norwegian. I’m 0% of course.
After the first show I was talking to Kjell-Olav from Salvatore about the amount of chord changes I had to play. He said “Yeah, it’s kind of prog.” Unnerved, I said, “Oh no, I’m working with the enemy,” and he said “You should embrace it.”
The audience at Dattera til Hagen: 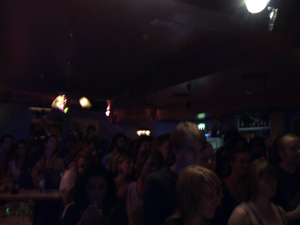 At Sound of Mu, l-r: Viviana, me, Ida (violin), Marie, (the Ida on cello is obscured). Click this one for a larger image. 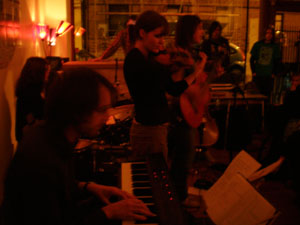 You can hear Hanny songs on their Myspace.
Long before my association with them, I wrote about the Hanny album. You can read this in an earlier entry of this blog: “Good Norwegian Music! (part 4)”.