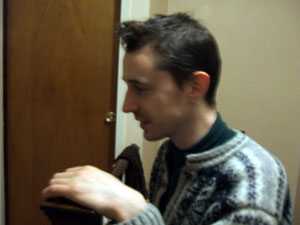 I’ve been back in the country 1 week, during which time I returned to work (ordering stuff for Sound of Mu, fixing/replacing things, covering the bar shifts of sick staff, trying to organize flights for a guest musician – yes, a million annoying small things at once, it’s that class of job); auditioned for a part in an advert (!); DJed at freaky nightspot Spasibar; travelled to suburbia to record a piano part for the Hanny album (although I’ve now left that band); spoke with 35 different people, sent 32 text messages, and finished reading three books. I would say that that’s an average week, and some people might be kept amused with a life like that, but I need more ‘blank’ days if I am to finally finish writing that novel I devised in 2004.
Anyway, I look forward to blogging for you on North in 2008, although I have no idea what I’ll be reporting on yet. Blather.net itself is likely to take off in crazy new directions. Godt nytt år!