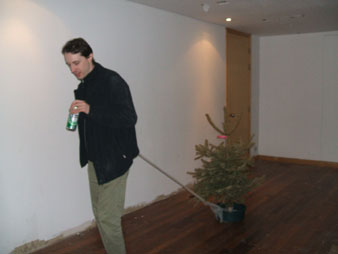 A sad London scene: an alcoholic takes his only companion, a Christmas Tree he calls “Rover”, out for a walk.

I used to live in London, and recently, for the first time since I moved to Norway, I returned there.
First impression: from the National Express coach coming into London on a Thursday night, the city looked dark, foreboding and full of high-rise buildings and streets with Lovecraftian geometry.
Second impression: getting off the coach at Golders Green, there was a smell of dust, and before me was a scene of red buses and shimmering lights. I felt like I was dreaming. Like when you dream you are in a place doing things you used to do many years ago.
The dream took me to Hampstead, where I was to stay for a few days with my friends Mark and Alyssa. They brought me to a pub around the corner, and we picked up where we left off nearly three years ago. This must have contributed to my third impression, which spread through my mind during Friday. Basically, I felt like a time traveller. My life in Norway began to slip from my memory and I felt like I had gotten into a time machine in 2005 and gone ahead three years.
On Friday I hit the second hand bookshops in the centre of town. Later that night I found myself in a pub in Waterloo, then some friends and I got hungry and went to a Turkish place on the Cut. I think this is one of the big differences between London and Norway. You don’t end up drinking as much in London, because you have the restaurant option and it is actually affordable.
Another difference became obvious late on Saturday night. I was at a warehouse party and it became quite disorganized and messy towards the end. In Norway, there is usually a well-organized nachspiel option and I’ve gotten too used to that. Instead the night seemed to fizzle out, and I walked home in the snow (!) to stay with another couple of friends, Lolo and Willy. The context of this was my “return” to Stoke Newington, my old neighbourhood, which looks pretty much the same, give or take a Tesco invasion or two.
Earlier on Saturday night I had a chance to quiz my friend Julia about the pressing issues of modern UK society. First I asked her about Girls Aloud. She said she was “not a fan”. She agreed that good songs were being written for them, but thought that “as people” Girls Aloud “did not warrant” them. As for Boris Johnson, who is running for mayor and might win, she was horrified anyone could vote for him. But on Friday I met my friend David, and he didn’t think Johnson could really do much harm, but David is very anti-Ken Livingstone anyway. Especially about the Olympic Torch thing. The metropolitan police were being deployed at enormous cost to the taxpayer, to escort what is an insult to Tibet through London. A newspaper poll stated that 55% of Londoners said yes to “scrap the games torch run”.
“That’s all that’s penetrated outside?” Julia asked me. “Girls Aloud and Boris Johnson?”
Well, there was a third thing. The media coverage of teenage kids murdering each other. It didn’t make much sense that this would suddenly happen now, when UK society hasn’t changed that much in the last 10-15 years. Lolo pointed out that maybe it’s changed for teenagers, though, in a way we don’t know. She seemed to think London had become a less tolerant place. “You used to be able to wear a bin liner and a lampshade on your head and no-one would care.” Not that I think she’s ever done that.
All in all, it was interesting that I was able to fit back in to the “society” with ease. I met 25-30 people I knew from before. Maybe I’ll visit again. Someone said I had now “broken the seal”.