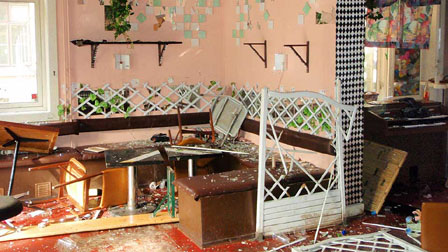 A hilarious article has appeared in Dagbladet detailing the destruction that occurred on Spasibar’s last night. Here’s a photo from Dagbladet showing how they trashed the furniture – but even though the business is in a building owned by the art school, it was Spasibar’s own furniture, so they were free to do so.
Whether they were free to light a bonfire on stage is another question…

Maria Kartveit, one of the owners of the unusual business, told the newspaper that “We burned the entrance money that we got, and the clothes we had on us. After that we left the place, naked.”
The journalist then asked Maria “The pictures show that the place looks like a battle-field after the party was over.”
Maria responded, “Yes, wasn’t it great? We should get a medal from the fire brigade for throwing such a good party.” 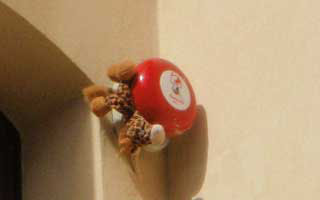 When she was reminded that the fire department actually think they were being irresponsible (the fire alarm was blocked with a teddy bear!), Maria said: “Yes, but maybe they [firefighters] only go to Christmas dinner and boring parties like that.”
She finished by saying that “We have always taken our own, free choice,” which is something you rarely hear someone say in Norway, a country more used to homogenous culture, social cohesion and a kind of nanny state telling everyone how to live.