The Innocence of Sleeping Children 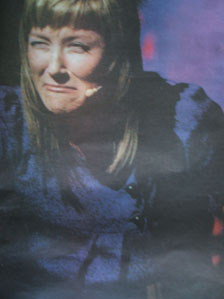 She’s back in the news! The ‘psychic’ Norwegian Princess Märtha Louise (pictured above). The controversy this time is that her angel school has begun courses for children.

For a small fee, the children will learn how to communicate with angels and how to see auras. Märtha’s partner in this angel-business, Elisabeth Samnøy, told the newspaper Dagbladet in an email published on 28 June that “people have their distinctive character and their own inner power. This is valid, naturally, for adults, youths and children.”
Obviously there are those who see this angel course for kids as manipulation of the minds of children, while others point out that most children are exposed to religious doctrine by their parents anyway, so what’s the difference? Are Märtha’s “light-beings” different to the guardian angels that Catholic children find solace in?
I suppose the difference between the angel school and a more traditional religion is that the latter does not revolve around a living individual who claims to have supernatural powers. There is a definite element of the cult of personality in this. Should the Princess’s followers be involving their children? Should children be raised in the shadow of Märtha Louise’s aura? Where is this all going to end? Another Alice Auma or Joseph Kony?
OK, Norway isn’t another Uganda. This is not a spirit medium mixed up with paramililtaries at grass-roots level! No, this comes from the top echelon of society, a wealthy Princess using the glamour of monarchy to draw people into her angel-world. The constitutional position as I understand it is that Märtha is no longer “officially” royal, i.e. she cannot ascend to the throne, but she is still a Princess, and it’s time that the Norwegian people divested her and the rest of her family of their unwarranted charm and allure, by doing the decent thing and declaring a republic.
Awaken from the dream, Norway!