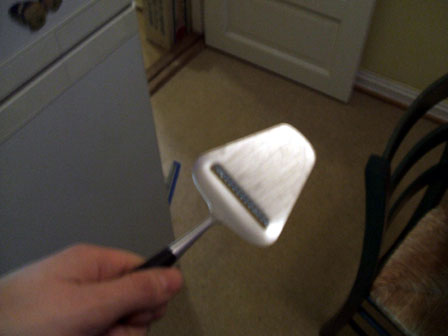 The Norwegian Thor Bjørklund (1889-1975), like Jesus, was a once humble carpenter, until he was gripped by a visionary thought…

Thor, a native of Lillehammer, liked his cheese slices thin. But god damn it, he couldn’t get those cheese slices thin enough! He then had the crazy idea of using his carpentry tools in the kitchen. His experiments with a carpenter’s plane on a lump of cheese were such a success, he designed the cheese slicer we know and love today, basing it on the plane.
On 27 February 1925 he was awarded a patent, and 27 February ever since has been celebrated as osteskorperdagen, ‘cheese-parings day’, the biggest holiday in the Norwegian calendar, when everyone gorges themselves on thin slices of cheese in the cold, icy streets.
Having now reached the depths of utter trivia, here ends our series on Norwegian inventions.